Vozniknoveniya causes and treatment of hemangiomas in children 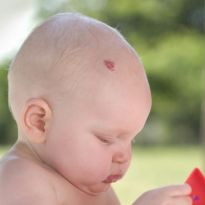 Benign tumours formed of vascular tissue, can occur even in newborn babies. Such tumors are known under the General term "hemangioma". The disease has its own classification, with which you will meet later. Hemangioma in children occurs suddenly and the doctors are still arguing about the mechanisms of the origin of the disease.

We also have to understand not only the causes and symptoms, but with timely diagnosis and treatment of the disease.

Children differ hemangioma benign - they can suddenly disappear without medical intervention. The swelling may appear in 2% of newborns, and among one year old infants at risk one in ten.

Depending on the time of appearance of the tumor hemangioma in children may be congenital or acquired (occurs after birth). There are four varieties of the disease:

Shades vary from crimson (in a separate case bluish) to pinkish. If you compare the temperature of normal skin and tumors, you will feel that the hemangioma is much warmer.

Depending on the type of tumor are the following symptoms:

How to diagnose children's hemangioma

There are two scenarios in which the evolution of childhood hemangiomas. The first scenario involves progressive growth and localization of the near senses (eye ear). The tumor in this case, you may bleed, become infected, ulcerate.

In such a scenario, the treatment of hemangiomas in children - a harsh necessity, without which can not do. However, in 70% of diagnosed regression of the capillary variety of pathology.

For the diagnosis of responsible surgeon, a pediatrician and a dermatologist. The latter deals with the treatment of pathologies, localized on the surface of the skin. When deeper penetration of the tumor you will have to seek help to a specialist - operating ophthalmologist or a neurosurgeon.

Diagnosis is based on several types of research:

Treatment strategy in most cases, defines the doctor-the dermatologist. The most effective method is the removal of hemangiomas in children - drug therapy does not always produce the desired result. Not independently hit upon the idea to open the tumor to stop the bleeding will be extremely difficult. Surface and spot forms of the disease can be successfully treated by the following methods:

There are hemangiomas complex anatomical structure, and certain tumors is a pretty vast area. In this case, required radiotherapy beam treatment.

Extensive damage of the skin (or subcutaneous) space is fraught with hormonal corticosteroid therapy. In a particularly difficult situation doctors combine treatments. For example, cryotherapy combined with magnetic microwave irradiation.

Stage of tumor formation and affects the choice of therapeutic strategy. In the early stages widely used method of freezing, providing for the treatment of pathology with liquid nitrogen. Formed a small bubble that will soon disappear, and the wound left after the operation, to heal.

The operational method is assigned only in extreme cases. This occurs after long observation of the pathology dynamics. The neonatal status should be extremely difficult.

Here is a list of indications for surgical intervention:

Some types of localizations are not amenable to operation. Then the doctors develop a complex medical treatment.

Conditionally they can be divided into two types - the use of "Propranolol" and the introduction of hormonal medications directly into the affected vessel. The first method is based on the pill, the second is the injection.

Note that hormonal drugs aimed at hastening the regression of hemangioma.

This method is relevant with the defeat of a large area of the body baby. "Propranolol" is introduced independently or combined with one of the operational impacts.

This is done in a hospital under strict medical supervision. Antibiotics for drug therapy to be completely useless.

The rapid progression of tumors observed in 6.7% of cases. After this can occur in regression and complete disappearance of disease. Pediatric surgeon may decide on follow - then get ready to be in the hospital. Methods of prevention of hemangioma at the moment does not exist.