Home / Veins and capillaries / Treatment of varicose veins in the legs

Treatment of varicose veins in the legs 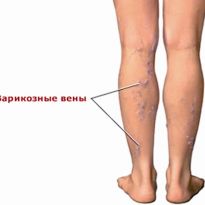 Varicose veins of the lower extremities that starts to really bother people only at the stage of appearance of pronounced changes in the condition of vascular - purple "bags", protruding above the skin, swollen veins or extensive clusters of spider veins.

However, all the above are already late manifestations of vascular disease and the first symptoms are usually few people pay attention, taking discomfort on a regular fatigue. And in vain: the treatment of varicose veins it is in the initial stage is the most effective and sparing.

The mechanism of occurrence of varicose veins

To understand the mechanism of development of varicose veins, you should know how blood circulates through the vascular of the legs. It rises upward, overcoming the force of gravity. This requires some pressure, which remains normal if the blood encounters obstacles. Pump function here to do leg muscles and the venous valves blocking the ejection of blood from the deep veins in the surface. 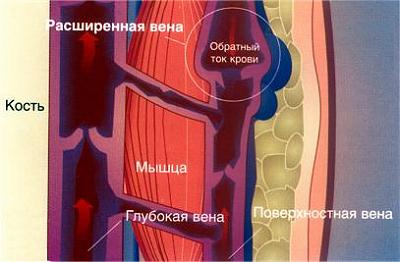 When this mechanism is disturbed (e.g., with constant squeezing of the leg muscles too tight underwear or shoes, large static loads), the body needs to increase the blood pressure to push it upward.

So developing valvular insufficiency in which there is reflux - backward ejection of blood from the deep veins in the surface.

A forced increase in blood pressure on certain sections of the veins leads to excessive stretching and premature exhaustion of the walls of blood vascular, resulting in visible bluish or purplish subcutaneous nodes.

However, the problem is not confined to the mere deterioration of the appearance of the legs: varicose veins of lower extremities inevitably entails a lot of complications that can lead to disability and even death.

Valve and venous insufficiency are the main cause of development of varicose veins, however there are many factors that triggers at some point, the mechanism of pathology.

Such factors may include a genetic predisposition (the nature of the weak walls and valves of the veins), so that from the outside influences on the functional state of the venous apparatus of the legs:

Some physiological conditions and diseases contribute to the development of varicose veins of the lower extremities:

When the disease is just beginning, the symptoms are a little wary of people because it is weak and passes quickly after a long rest and sleep. Briefly it can be called the syndrome of heavy legs, which is manifested in the following: 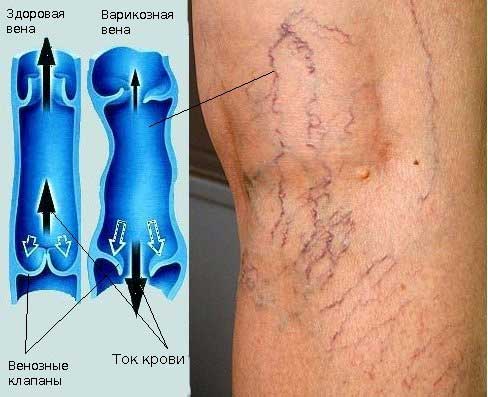 The appearance of edema in the early stage of the varicose veins noted at first only of the ankles and the back sides of the feet, and as the disease progresses the swelling rise higher - to the lower legs.

Skin in the affected areas changes color, becoming bluish, and then purchasing crimson hue, which experts regarded as a sign of development of chronic venous insufficiency. In the most advanced cases in the legs appears sores.

How to diagnose varicose veins

As mentioned above, few people pay attention to the condition of his feet at the beginning of the disease and go to the doctor only after many years, already noticing the obvious signs of disease - swollen veins, crimson or blue nodes.

Of course, such obvious symptoms, coupled with complaints of pain and difficulty moving speaks for itself, but experts phlebologists never limited to only inspection. 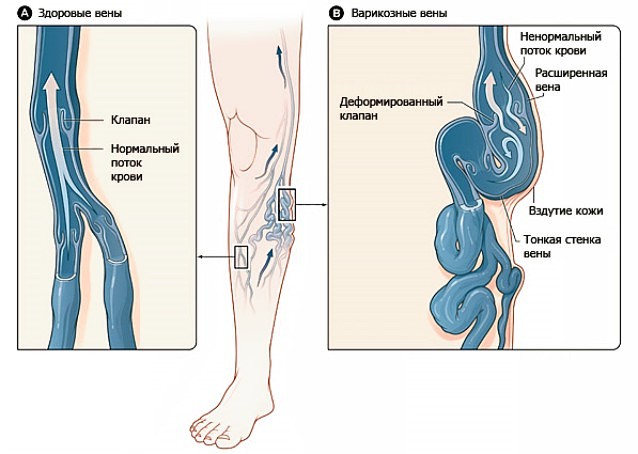 For a more accurate assessment of the vascular of the legs is used special tests and ultrasonic techniques: these diagnostic procedures allow to determine the status of the venous valves and the degree of patency of deep veins.

With this sample you can assess the condition of the valves of the superficial veins, forwhat the doctor instructs the patient to raise the affected leg 45 degrees and gently empty the varicose veins and knots on them, stroking from the foot to the groin.

Then the upper part of the thigh pull together a soft harness (as an option - compress the fingers superficial vein in the oval fossa), and offer the patient to stand up.

In the standing position is evaluated, the filling rate of the veins of the Shin: they should be filled with blood after 15 seconds or more. If the content is faster, it indicates a failure of the valve apparatus communicating veins. 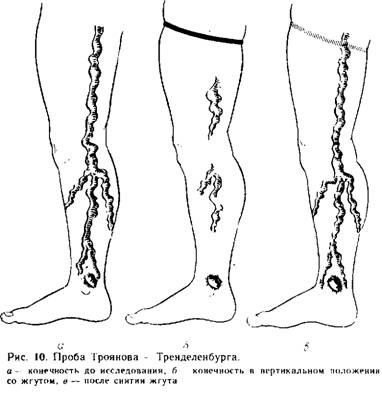 After removing the harness or the termination of the compression of the superficial veins of the estimated rate of filling of the femoral veins and the veins of the calf: if it happens in less than 15 seconds, the doctor may suspect the failure ostalnogo and stem valves of the great saphenous vein, which is typical for primary varicose veins.

A manner determined by the failure ostalnogo valve. For this offer the patient to cough, pressing a finger on the oval fossa. Cough when you push your finger feels the movement of blood, if the failure has already developed. In this case, the sample is considered positive Hackenbruch.

To diagnose venous and valvular insufficiency, the degree of patency of the vascular used two samples Pratt, marching test, the sample Thalmann.

The most complete view of the status of venous system varicose veins of the lower limbs gives ultrasound - duplex scanning or Doppler ultrasound. Within an hour the technician receives absolutely objective and accurate information about the condition of the walls and valves of blood vascular, patency of the veins, thrombosed areas. The results of the study form the basis of the chosen treatment - outpatient or surgical.

Treatment of varicose veins of the lower extremities

Depending on the degree of vascular lesion, the doctor chooses a treatment option.

Conservative treatment is used in cases where the vein is not too dilated or there are contraindications to carrying out any operations.

This therapy is to constantly wear a special compression linen and elastic bandages, and the use of drugs - phlebotonics, diuretic to eliminate edema and means for the improvement of blood microcirculation in tissues.

Not last role is played by diet: to prevent further deterioration of the condition, patients are advised to restrict salt and drink.

Patients will be advised of the courses of physical therapy, where they offer to do special exercises to strengthen the walls of blood vascular andimprove circulation in the legs.

Surgical operations are appointed to prevent reflux (back of touch of blood from the deep veins in the surface). They bring the most effective results, since to solve the problem of radical excision of the trunks of great and small saphenous veins with ligation of the communicating veins affected.

However, this treatment has its contraindications.

Surgical intervention is prohibited when:

The most gentle and effective method of treatment of varicose veins (by the way, not only the foot) is recognized as sclerotherapy. Its purpose is to destroy the intima of the affected vein, for which there is introduced a special sclerosing solution. Further, the walls of the vein stick together without the formation of clot.

Several such manipulation can achieve full contraction varicose veins and "off" from the system of venous blood flow.

Sclerotherapy is less traumatic, absolutely painless, and the period of rehabilitation after a course of these injections ranges from one month to three - and serious limitations of motor activity is not required.

Varicose veins are not only ugly, but dangerous: a neglected pathology often immobilizes patients, and the high likelihood of venous thrombosis does not exclude the occurrence of severe and threatening complication - pulmonary embolism.

To prevent such a finale, take care of your feet since childhood: watch your weight, enough move, don't forget about breaks during performing many hours of sedentary work, and properly carry the weight, and learn to relax cowboy - with raised and outstretched on a chair or low table legs.

It is important to know how to prevent varicose veins the legs.