Home / Veins and capillaries / Treatment of varicose veins of the esophagus

Treatment of varicose veins of the esophagus 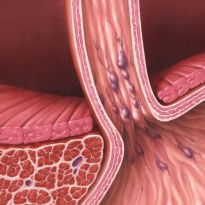 About what are varicose veins, non-medical public talks concerning the lower limbs. But that is varicose veins of the esophagus, known to few inhabitants. To understand what is this disease, what symptoms peculiar to him should have an understanding of the blood supply of the esophagus in General. And if it will dilate veins, what causes are able to provoke.

As the blood supply to the esophagus

Venous plexus of the esophagus are complicated. The outflow of venous blood goes in two directions: downward and upward. The system of connecting veins between them, is called portocaval anastomoses. It is in their region and often there is varicose veins of the esophagus.

What is the pathology

International classification of diseases, 10 revision, which is used by modern doctors, distinguishes two varieties of the disease:

Very rare, but still documented in the medical literature. Typically, infants with congenital varicose veins of the esophagus suffer the many additional serious illnesses. 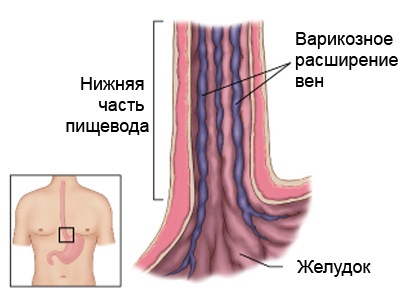 This form likes the population over 50 years old. And the males varicose veins of the esophagus is a 2: 1 ratio compared to women.

Born from the analogy of when the causes of disease with men's bad habits (overeating, Smoking, alcohol abuse). However, this is only an analogy.

The causes of varicose veins of the esophagus is well known to gastroenterologists.

The main reasons for development of varicose veins in the esophagus are associated with a particular pathological condition is portal hypertension. It increases in the portal vein the pressure that causes the to expand and thin the wall of the vessel.

There are several specific causes of varicose veins:

All of these pathologies require timely and regular treatment.

There is endoscopic classification of varices of the esophagus (varices), in which there are 4 degrees.

The grounds on which suspect disease

To recognize their own illness is unlikely in the early stages, because symptoms of varicose esophageal veins to a certain period are missing or are cleverly disguised as other diseases.

Initially the patient might be bothered by the following symptoms:

Treatment with medication involves the use of medications for the underlying disease, and to address the accompanying symptoms can be used vitamin supplements, antacids, astringents.

In the case of minor bleeding, conservative treatment is provided by:

Patients should be aware that this pathology is incurable and carries a pronounced risk of death from bleeding, so with early detection of disease to follow all the recommendations on supportive treatment.

If we consider the mortality from bleeding in the esophagus, the numbers don't look encouraging. More than half of patients die, this is largely due to the severity of the underlying disease. Such indicators convince of the need for adequate treatment of the underlying pathology.

The most accurate diagnostic method esophagoduodenoscopy. It helps to define the extent of the disease, the probability of bleeding. Of instrumental methods used also ultrasound diagnosis, contrastx-rays of the esophagus. Conduct research of blood General and biochemical analyses.

How to organize a diet

Diet displayed in a separate part because of its exceptional importance. The fact that exposure to cold or irritating food greatly increase the risk of bleeding, so patients with symptoms of varicose veins of the esophagus to use, you should not.

There are several rules of nutrition that must be followed:

As you can see, this diet involves a complete upheaval of the regime. About the food now need to think of is a pledge that surgical treatment is not required.

Now about the foods that should not be consumed.

Even if you are extremely difficult to give up your favorite foods, is a vital measure. Bad statistics of survival after bleeding needs to convince you of this. Indeed, despite the favorable outcome of the operation, which you could not be avoided, almost 70% of cases in a couple of years later a recurrence, the bleeding is repeated. So much easier just to avoid.

You may also be interested to read about varicose veins of the lower extremities.