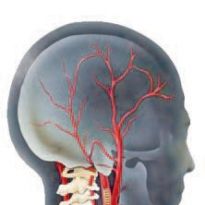 The carotid arteries deliver blood to the brain. It is the large vascular in our body, so the narrowing, i.e., stenosis, leads to very unpleasant consequences. The most feared complication, which brings stenosis of the carotid artery is ischemic stroke. It is a necrosis of one or more parts of the brain due to lack of blood supply.

The immediate cause of the narrowing or obstruction of the carotid artery often becomes atherosclerosis. As a result of this disease in the walls of blood vascular formed cholesterol plaques, which eventually increased and more and more reduce the lumen of the vessel. Also common cause of stenosis of blood vascular — blood clots that block the arteries. The lack of timely treatment can lead to catastrophic health consequences and even death. 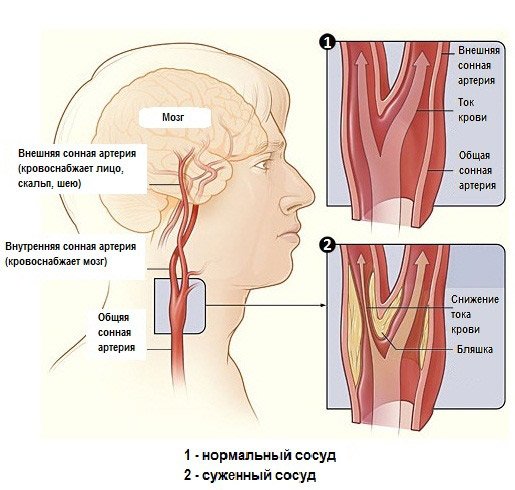 Atherosclerosis of the carotid artery.

Stenosis of the vessel develops gradually, atherosclerotic plaques build up and increase in the carotid arteries several years. If the process is slow, people long to feel the symptoms of narrowing of the arteries. As the deterioration of the condition of the vascular show signs of the disease.

This condition develops when for some time blocked the blood supply to the brain. The symptoms are temporary and can last a few minutes or hours.

The symptoms of transient ischemic attack

Transient attack is unpredictable, it is impossible to understand whether to continue the current economic condition or the body quickly returns to normal. If symptoms develop and the problem progresses, it can become ischemicstroke. As soon as the symptoms are transient attacks, you need to call an ambulance.

Emergency treatment greatly increases the chance to recover or may even save a life.

Ischemic stroke, which is 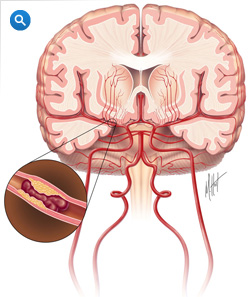 The brain can accumulate and store oxygen, so it works only as long as the blood vascular that supply it with blood that is rich in oxygen.

Lack of oxygen causes nerve cells suffer, and in his absence begin to die after 3-4 minutes. The cessation of the supply of oxygen to the brain is ischemic stroke.

One of his main reasons for stenosis of the carotid artery. Stroke threat of irreversible consequences, which result from the death of parts of the brain. Symptoms such as problems with speech, vision, mobility impairments, you can stay forever.

During diagnosis it is necessary to clarify the nature of blood circulation, the degree of narrowing or blocking of vascular, as well as their condition. Only then can you choose the right treatment.

How to treat carotid artery stenosis

For the treatment are various methods and medical procedures. Required recommendation is to optimize lifestyle. Among the medicines, all patients with identified carotid stenosis prescribe antiplatelet drugs. Most often the drugs are using aspirin. Improves blood circulation, which reduces the risk of stroke.

May be prescribed anticoagulants. Activators of tissue plasminogen are prescribed for the treatment of ischemic stroke, these drugs dissolve the blood clots clogging blood vascular. They should be used as soon as the first symptoms of a stroke, the greatest effect is achieved in the first three hours.

Data manipulations are performed quite fast and give good results. Completely restored blood flow to the brain, nerve cells get enough oxygen and can function normally.

To stop the progress of carotid stenosis andto prevent stroke, doctors recommend to lead a certain lifestyle. It does not require any significant restrictions or Herculean effort just to do something that will maintain the health and cleanliness of the vascular.

What is needed for vascular health

We also recommend you to read the article: treatment of stenosis.