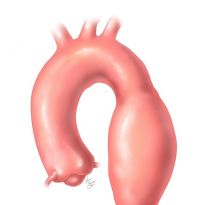 An aortic dissection is one of the most serious damage of the vessel, represents a lethal threat to life. According to statistics, 65-70% of victims do not seek help, dying of severe internal bleeding. Of undergoing surgery about 30% of patients do not survive. The forecasts in this disease is far from rosy.

Is crucial for the survival when aortic dissection is timely diagnosis. Despite the relatively simple methodology for determining the damage cases do not recognize is frequent.

The aorta comprises three layers - inner, middle and outer. The stratification is due to deficiency of the middle layer for any particular site. Because of this damage and possible tear of the inner layer (intima) and the formation of a false lumen between intimal and the outer shell. Tear can capture a portion of the aorta or distributed throughout the internal volume.

Dissection or dissecting aneurysm can form in any part of the aorta and ends with the rupture of a vessel within a few hours or days.

A simplified classification divides diseases by type A, which corresponds to lesions of the ascending arc, and type B dissection descending.

An aortic dissection is formed on the background of already existing degenerative changes in the tunica. Mechanical cause of violations of acts of excessive physical effort, emotion, or caused bysome other factor in the jump in blood pressure.

The real reason are disorders and diseases that cause degeneration of the tissue of the vascular.

The cause may be direct mechanical damage when injected into the vessel of a foreign body, but such cases are quite rare. Treatment, however, almost always involves surgery.

Very rarely, the aortic dissection is not accompanied by pain. However, this exception to put it mildly, not happy: if in the ascending phase is already formed aneurysm, the dissection is painless.

In all other cases, the symptoms of aortic dissection are the strongest of unbearable pain. Moreover, the treatment includes taking pain, but not always, the symptoms manage to suppress. The pain is localized in accordance with the damaged area, and the promotion of dissecting aneurysms can move to different areas of the body. 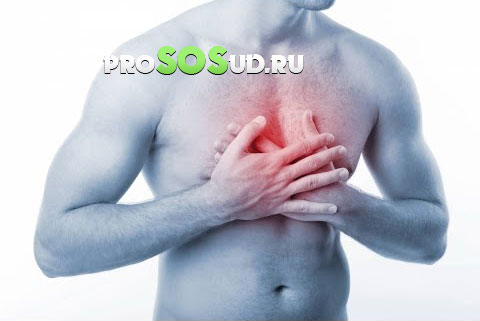 Many patients describe the pain as tearing apart the bundle. However, the same kind of symptoms occur in acute infarction, acute violation of brain blood circulation, and even "acute abdomen". Characteristic of stratification and the abdominal and thoracic aorta is sharp, sudden and persistent pain.

The patient is very restless, constantly trying to change the position of the body toto ease the pain. This is the second characteristic feature, as, for example, angina pain with limited activity weakens.

For diseases of the heart and vascular is characterized by the similarity of symptoms with completely different causes, which is extremely complicates the definition of the disease and its treatment. Sometimes this leads to fatal errors.

So, the symptoms of an aneurysm of the proximal aorta is very similar to coronary artery ischemia, treatment of which requires the input of thrombolytics - drugs that dissolve blood clots that when stratification is death, as the triggers active development of the disease.

The stratification of the thoracic or abdominal aorta should be suspected in any patient with acute, tearing apart the pain in the sternum or salopettes region, with fainting for unknown reasons, especially in cases where a fixed difference between the pulse and blood pressure.

To establish or refute the presumptive diagnosis is possible using these methods:

The treatment of the patient with aortic aneurysm

The rate depends on the duration of separation and localization. However, in any case, the treatment involves immediate transportation to the hospital and complete physical rest, as any kind of activity provokes further damage to the shells of the vessel and maylead to irreversible consequences.

To suppress such effects to patients intravenously administered drugs that reduce blood pressure.

The dissection of the thoracic aorta is an indication for immediate surgical intervention, regardless of the timing of the formation. Treatment, that is, the operation involves excision of the damaged site and its prosthetics with synthetic vessel.

If the damage is a rising arc of one surgery is enough to completely eliminate stratification. If the lesion was exposed and the descending part, the prosthesis and the abdominal aorta, is carried out in the second turn.

An aortic dissection is a disease that threatens life. Misplaced doubt need surgery or not. Even thorough preparation and perfect execution are not a 100% guarantee of survival of the patient. But if treatment is not carried out, the chances of further life reduced to 20-30%.