Home / Veins and capillaries / Surgery for a varicocele of the testis

Surgery for a varicocele of the testis 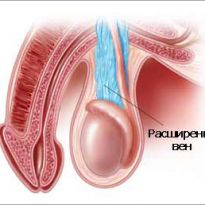 Varicocele is one of the few diseases whose treatment can only be surgical. However, the instrumental invasion of the body always raises many concerns, not only regarding the course of the operation itself and its own feelings of the patient, but also regarding the future prospects of the rehabilitation period and possibility of full recovery.

What will the surgical treatment and what to expect after surgery varicocele?

For the operation on varicocele there are several types of surgical procedures - classic and modern.

Each of these types has its indications and contraindications, its advantages and negative points.

Operation ivanissevich - long ago developed a standard method of operation for varicocele that future surgeons studying in high school so it is a "must have" set of professional skills of any surgeon-urologist.

Its essence consists in the ligation of the veins of the testis in retroperitoneal space, resulting in complete blocking of the blood supply to it. 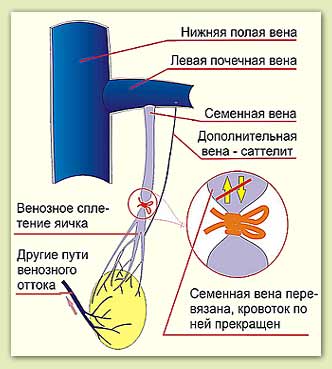 The Method Of Ivanissevich.

What are its advantages?

However, it has its drawbacks - and very important: they relate to the postoperative period, in which many patients develop hydrocele (hydrocele), and re-expansion of veins (varicocele recurrence). In addition, although rare, but possible atrophy of the testicle, which is one of the most unpleasant consequences of this surgical technique.

Especially frequent recurrence in children: they develop a little less than half of the cases.

This is due to the fact that after ligation of the testicular vein remain small vascular branching from it, as well as collaterals supplying the additionalbranches, and bind that manually is almost impossible, because they are often not visible to the surgeon. They subsequently re-exposed to varicose veins, which again turns to the development of varicocele.

Laparoscopy is a modern endoscopic technology, devoid of the disadvantages of the operation for varicocele by Ivanissevich through increased access not only to the affected testicular vein, but also to smaller vascular-collaterals, invisible under normal surgical manipulation.

This became possible thanks to high-tech tools - a flexible tube with a tiny video camera on the end, inserted through a small incision in the abdomen, and three laparoscopic ports are introduced in the umbilical region, in the left and right iliac regions. 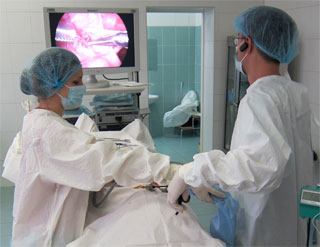 The surgeon watches on a monitor screen, performing all necessary manipulations.

What are the benefits of this type of surgery for varicocele and in some cases, experts give preference to her?

Here are the reasons for the use of laparoscopy:

In addition, the laparoscopic method is the best for re-treatment of varicose veins of the spermatic cord in cases where the operation for varicocele Ivanisevic did previously, but she gave a relapse. During a laparoscopy, the surgeon is able to see all the collaterals and other small vascular that were not visible and were not subjected to ligation in normal operation, therefore, the effect of such intervention is immeasurably higher, and unpleasant consequences are minimal.

The disadvantages of the method - the need to use General anesthesia, which is not always acceptable due to the existing patients of cardiovascular disease or other comorbidities. Also the operation requires special equipment and skills to perform laparoscopy, the surgeon that is available only in hospitals in the cities.

Operations on varicocele and laparoscopy banned if patients have an acute inflammatory or cancer of the abdominal cavity. Do not spend them and to patients already undergoing several laparoscopic procedures.

A microsurgical technique of varicocele surgery is recognized as the best among all the existing methodsthe treatment of varicose veins of the spermatic cord. Her goal is to replace diseased testicular vein on the healthy - for this purpose, the epigastric vessel, which is attached in place of the removed section of the veins of the spermatic cord with the creation of vascular anastomosis - anastomosis. 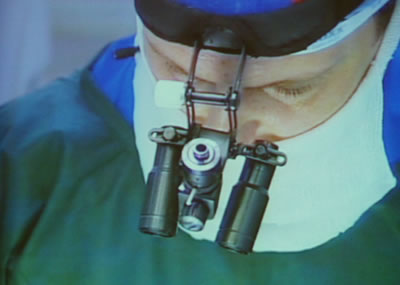 The advantages of the method consist in its physiological, a small number of cases re-development of varicose veins, a short period of stay in the Department of surgery and a short rehabilitation.

This is due not only to the fact that the restoration of blood flow in the affected testicle occurs immediately, not after a few days as in other types of operations on varicocele.

The very point of holding such interference is in complete normalization of blood flow in the testicle, not in the simple ligation of the affected vein and its branches, and therefore the number of negative impact there is negligible.

Complications of microsurgical intervention can be attributed to accidental damage nerve endings in the inguinal canal, bleeding and infection inflammation of the operated areas, but these effects are very rare.

Do not conduct microsurgery on varicocele patients with cancer and severe cardiovascular diseases, diabetes.

The recovery period is quite fast: already on the second or third day patients discharged from hospital, and the stitches are removed after 8-10 days.

The main drawback of microsurgical intervention in varicocele is that it is expensive: the cost of surgery varies from 40 to 90 thousand rubles. This is connected not only with necessity of use of expensive optics, special instruments and that perform such operations can only specially trained surgeons are qualified.

What type of surgery to choose - a matter to be decided by the patient and attending physician: the patient wants the operation was cheap and effective, the specialist have to not think so much about the solvency of the patient, but about the purely medical things - age, concomitant pathologies, and the likelihood of complications.

So it makes sense to listen to the doctor if he recommends not a simple operation of Ivanissevich and laparoscopy or microsurgical treatment: most likely, the specialist there are good reasons for this choice.

Learn what you can from varicocele separate article on our website.