Home / Veins and capillaries / Treatment of lower limb lymphedema when

Treatment of lower limb lymphedema when 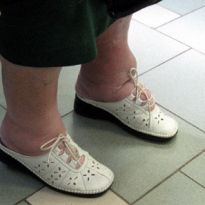 Swelling of the legs, appearing in the evening and the self-vanishing by morning, the initial sign of a serious disease of the lymphatic system, characterized by stagnation of lymph in the tissues due to disturbed circulation. Lymphedema of the lower extremities - so officially is referred to in medicine, this pathology.

It is not a rare: one in ten people in the world have these or other problems with the lymph circulation. Noticed swelling, medical examination and appropriate treatment allow to avoid progression of the lymphedema, so - to maintain health and the ability to walk normally.

Lymphedema of the lower extremities is both innate and acquired. A congenital form of the disease occurs when underdevelopment of the lymphatic system, there are also genetic variants, when sick for several generations in the same family. 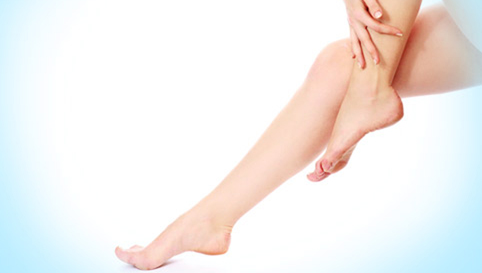 Acquired lymphedema has many causes, among which are:

Any condition in which there is a constant compression of lymphatic vascular also lead to the development of lymphostasis of the lower extremities. Such conditions include tumours and infiltrates, often arising on a background of inflammatory processes.

Infections and parasites are also culprits of swelling of the lower extremities. For example, erysipelas and cellulitis, the causative agent of which is the Streptococcus, often accompanied by lymphangitis - inflammation of lymphatic vascular, when the infection penetrates deep into the tissues, affecting the first discharge surface, and then deep vascular.

The disease is years, but because without treatment, or non-compliance with treatment policy goes through three stages.

The first stage, which is called lymphedema, usually does not cause patients particular alarm: on the ankle joints (one or both) in the evening appear soft swelling.

Lower leg swelling after exercise, long standing on legs or intense walking during the day, a fixed seat during the airline flight, or perform any other "sedentary" work.

These swelling to completely go in the morning or after a long rest, but then appear again. At the stage of lymphedema there are no irreversiblechanges in the tissues, pain, cosmetic defects of the skin of the feet. This is the long stage of lymphostasis of the lower extremities.

Fibregum is characterized by a dense swelling, rising up from his legs. The swelling is so dense that it is impossible to raise a skin fold. At this stage, which lasts several years, the legs gradually deformed, the skin on them changes color, becoming darker than usual.

The third stage of lymphedema is characterized by a special severity - appear irreversible changes in the lymph circulation, fibrocystic degeneration of the tissue and elephantiasis of the legs.

Ulcers, malignant neoplasms (lymphosarcoma), eczema, erysipelas - that's more than accompanied by this form of the disease that makes the person totally disabled. 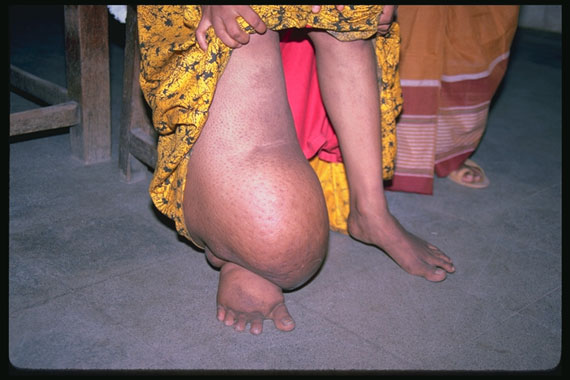 Elephantiasis on the legs

We can not say about the problems of purely psychological properties: people whose legs increase in diameter up to half a meter, is suffering from disfiguring changes, becomes withdrawn, depressed.

How to treat lymphedema of the lower extremities

The sooner we confirmed the diagnosis of lymphostasis in the lower limbs, the more favorable will be its course and the sooner full recovery.

Depending on the severity of the stages and other existing diseases, the treatment of lymphedema can be divided into several areas that are quite well combined with each other:

For example, at the initial stage it is enough only course of physiotherapy combined with a diet aimed at the reduction of salt and the establishment of a balance between proteins and fats obtained from food.

The purpose of the application of the physical therapy programs in the treatment of lymphostasis of lower extremities is to eliminate stagnation lymph circulation and normalization of its further circulation.

The course duration is determined individually.

Physical therapy is commonly combined with medication courses that improve tone of vascular walls, enhance them and correct the immune system. Usually patients are assigned to such drugs:

Treatment of lymphedema is carried out only on the testimony of the only expert, and self-assign themselves any one drug.

Violation of lymph drainage is very common in people with chronic kidney disease and heart failure stage. In connection with the specifics of these abnormalities, patients are assigned a special diet aimed at minimizing the consumption of salt and salty foods.

Lymph flow is hindered and those who have to their credit a couple of dozen extra pounds, so they recommended a low-carb diet that allows you to break down excess fat. It is important that salt are included in the number of products subject to strict control.

When conservative methods exhaust the possibilities, and lymphedema progresses, threatening a disability in the course are surgical methods:

What method of surgical treatment is elected, to be solved by specialists, so you should listen to their opinion that the intervention was less traumatic, and the result is encouraging.

Finding on my legs and feet swelling, do not consider them just a nuisance. Contact the experts for a survey and figure out what's causing the swelling, and then find a good time to undergo treatment. Promptly initiated and conducted treatment will save you from lymphedema, and your gait for many years to keep the ease and speed of operation.