Home / Veins and capillaries / How to treat bleeding eyes

How to treat bleeding eyes 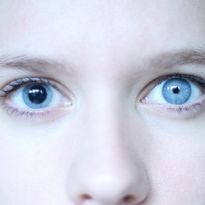 One day, walking up to the mirror, you see a discouraging picture - in the eye formed a bruise. To get to the hospital or, for example, to do the drops at home? It is better to consult physician as bleeding in the eye can have many explanations - from the abrupt physical exertion to symptoms of very serious diseases.

Why is there bleeding in the eye

There are only two causes of intraocular hemorrhage:

The severity of a concussion effect on the safety of vision in the eye: in some cases it does not disturbed, others temporarily reduced or lost completely.

There are three degrees of concussion: 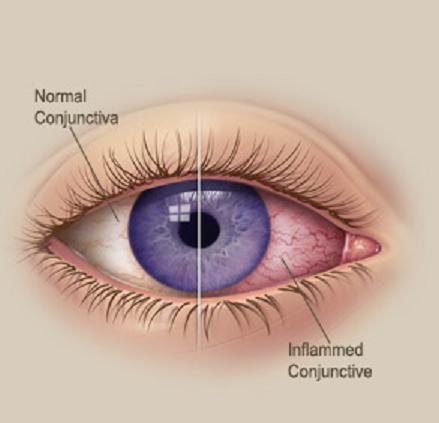 Any eye injury should be taken very seriously: sometimes even a slight injury can have tragic consequences, as the degree of contusion is not always correlated with the severity of the injury.

Non-traumatic hemorrhage in the eye

Eyes - on, richly Sabaudia blood, and therefore have a branched vascular network. Some diseases can affect the elasticity and the permeability of the walls of eye blood vascular, so bleeding in the eye or in both eyes - a common and inevitable symptom of serious pathology:

Recurring hemorrhage in the eye, even if normal health is a definite reason for the wide survey, which can be identified the true causes fragility of blood vascular.

Practical and beautiful lenses, which often replaced the usual glasses, can also cause hemorrhages in the eye, if they are mismatched. Mechanical irritation of the mucous membrane not only causes her irritation and feeling of sand, but also injures the small blood vascular. The result are small bruises that disappear quickly, if the time to refrain from wearing lenses and then choose their correct size.

The female body during childbirth carries tremendous stress, so the tears of small blood vascular in the eyes are common. They gradually resolve themselves without treatment. 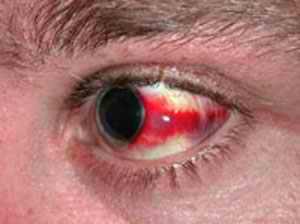 Physical activity associated with, for example, sport activities or hard work, also can cause bleeding in the eye. Enough to reduce their intensity and bruising will disappear.

Long flight, during which the constantly changing pressure can cause damage the small blood vascular and, as a consequence - the appearance of bloodshot eyes. After a few days it will pass without treatment by itself.

The strained cough of allergic or infectious origin - another reason for the appearance of small red dots in the eyes. With treatment of the underlying disease they also disappear.

There are situations in which the whites of the eyes lose their natural white color and become reddish with different intensity: the small blood vascular in them become visible to the naked eye. Of course, a real hemorrhage in the eye is difficult to call, but to treat a problem lightly is not: the cause here can be not only banal fatigue or lack of sleep, but in a much more serious things - for example, in the development of infectious process.

Viral or bacterial conjunctivitis - the most common cause severe redness of the eye. However, the mere redness is not limited to: the person complains of a burning sensation, pain, lacrimation. In such cases, an urgent need to go to the clinic and start the treatment, as conjunctivitis is extremely contagious. 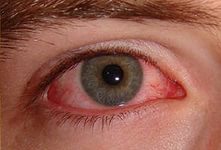 Havesome people redness the eyes sometimes in the morning after taking alcohol. It is an individual reaction. You just need to refrain from drinking and eye color quickly returning to normal.

How to be treated?

Finding eye bruising, don't worry too much only in one case: if the eye is not sore and vision is not impaired. Otherwise you'll have to go to the doctor to find out why there was a hemorrhage in the eye: treatment may require a rather long and serious.

If the eyes are very red, or there was a bruise, but the pain and foreign body sensation no commonly used pharmacy drops or home remedies to quickly remove redness.

Visine, octile, naphazoline for the eyes, okumetil - vasoconstrictor drops, which prevents the release of blood through the blood vascular. They are usually used to quickly remove even a fairly intense redness.

Treatment of hemorrhage in the eye, lasts longer, requires careful observation and care. The main methods of treatment is application of cold (ice, food from the freezer), and packs of herbal teas, a tea infuser, juice house plants.

Here are some recipes through which you can get rid of bruising in the eyes:

A compress of strong tea

Black tea brew stronger and allow it to cool (the colder it will welding, the better), soak a cotton ball (wrap it in a bandage, so lint does not get into the eyes) and attach to the sore eye. Soak for 15-20 minutes.

A compress of chamomile

Brew a strong tea of chamomile (two tablespoons of dry flowers per Cup of boiling water, allow to steep and cool down. Strain the infusion and moisten it with a cotton ball, wrapped in a bandage. Attach to the sore eye and lie down for a while.

Wash water with vinegar or ash

In a tablespoon of boiled water add one to two drops of ordinary vinegar, stir and moisten a cotton pad to attach to the sore eye.

The same can be done with ash: if it is, the need to boil a bit of ash in water, strain the decoction, and applying a tampon soaked in this liquid, to the patient eye.

If the refrigerator is fresh cheese, you can take a teaspoon of product and apply to eye, cheese wrapped in a bandage or piece of clean natural fabrics. A good effect will give and compress whey.

Lotion of cabbage or cabbage juice

The leaves of fresh cabbageto grind into a puree and apply the resulting slurry to the patient's eye, wrapped it in a piece of clean cloth. The same effect will give fresh cabbage juice.

Everything compresses and lotions need to be applied several times a day until improvement of the condition of the eyes.

Bruising in the eyes - a sure sign of the fragility of blood vascular. This suggests that the body lacks the vitamins C and p make Up for their shortages and prevent bloodshot eyes in the future can be a regular intake of a conventional tongue, ascorutin or complex vitamins, which include vitamins C and R.

In summer, the diet of the people who have problems with vascular permeability, needs to be a seasonal fruit, berries and vegetables, and in winter sauerkraut, citrus.

You need to remember that bruising in the eyes is not only a cosmetic defect, but also cause for concern - especially if they appear regularly and for no apparent reason. Hurry to the doctor - maybe you have serious health problems: it is about them and say your eyes.

You might want to know what to do, if in the eye of the burst vessel.