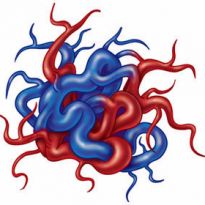 Vascular anomalies of the circulatory system aneurysms and sudden dangerous hemorrhages. Their frequent companions, disability and mortality. Of birth defects this number is most common arteriovenous malformation. This defect is characterized by a network of abnormal connections of arteries and veins without the formation of blood vascular and capillaries.

A common place of their localization - posterior cranial fossa, a typical structure is one or a pair of arteries, draining vein and an extensive network of malformations.

Most common hemorrhagic type of malformation. It is characterized by small size of the tangle, and high blood pressure. The annual risk of hemorrhage equal to one and a half to three percent. The risk of recurrent hemorrhage is eight percent. Sometimes the rupture of vascular malformations and bleeding to happen during pregnancy, this leads to the quarters of intracranial hemorrhage during pregnancy is the cause of 5-15% of all maternal mortality. Hemorrhagic type AVM, leads to the formation in the patients of intracerebral hematoma.

Torpid type reveal a quarter of patients: arteriovenous malformation in the coil is localized in the cerebral cortex and has considerable size.

The symptoms of this type of anomaly is similar to the presence of a brain tumor.

Patients complain of occasional but very severe headaches, convulsive disorder (convulsions when it is frequent and rhythmic), symptoms of neurological deficit, pointing to local lesion of the brain.

Clinical manifestations in the blood vascular of the head

Most often arteriovenous malformation of cerebral vascular is manifested in the form of sudden hemorrhage on the background of complete well-being with health. To provoke a rupture of a vessel of the brain may drinking large amounts of alcohol, stronger than usual, exercise, stress.

The patient has the following symptoms: 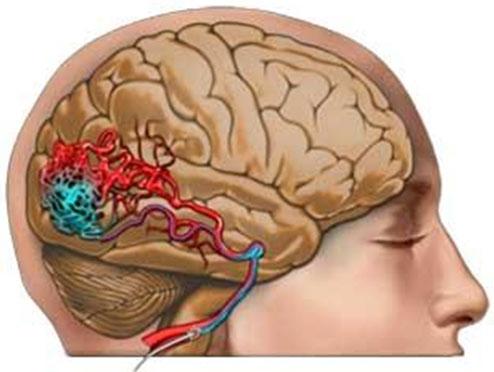 The severity of hemorrhage from AVM is usually determined through the scale of hunt-Hess defining surgical or conservative treatment:

Patients in the mind, often have neurological disorders.

A few hours after bleeding occurs meningeal syndrome of varying severity, 30-40 mm Hg rise in blood pressure. With the development of brain edema and the beginning of the collapse of blood the patient's condition is deteriorating. It takes 4-5 days, then comes improvement. Under favorable dynamics for 5 day stabilization occurs, at 6-8 improvement.

If the hemorrhage affected the vital parts of the brain destroyed motor conductors, the condition remains serious but stable, without any dynamics. If the symptoms increase gradually along with the growth of the swelling, you can expect speedy improvement with reduction of the hematoma.

Clinical manifestations of rupture of the AVM varied, they depend on the size and location of the damage.

AVM hemocirculation contribute to robbing the neighbouring land, in 30-40% of cases it causes epileptiform seizures. Malformation often irritates the surrounding areas, causing apiradi. Around the balls are sometimes generated glial areas, characterized by destruction of neurons that represent fragments of thin scar tissue. The presence of gliosis also provokes approbate. Spasms when AVM manifests itself at any age, suddenly, against the background of complete health.

If AVM is selected surgical treatment: traditional and using radiowave surgery. The operation is performed on one strategy: coagulation or embolization of the artery.

Vascular malformations of the spinal cord

Vascular pathology of the spinal cord is poorly understood and rarely found a violation. Currently there is no classification of disorders and difficult to diagnose. 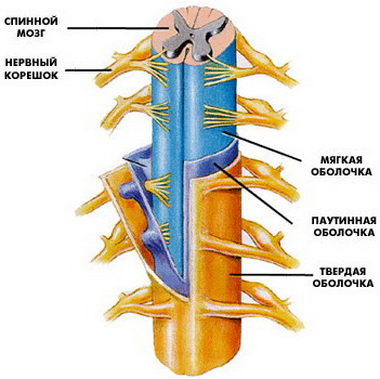 The structure of spinal cord

Often this malformation occurs in men of middle age, affects srednesrochnoi and nizhnepechorsky the spinal cord.

The disease at first resembles multiple sclerosis, its development leads to paresis, paralysis, patients lose the ability to walk. One third of patients complaining of back pain, intermittent claudication.

Vascular pathology of the spinal cord require differential surgical treatment using microsurgery, endovascular interventions. The key to success is an accurate representation of the location, size, dynamics of development of pathology. Where possible, surgical treatment with a minimally invasive approach.

The task of the operation - off of the arteriovenous malformation, a decrease in the intensity of blood flow. Previously performed obstruction of the vessel, resection is carried out by the method of direct approach to the lesion is blocked by supplying the tributaries that feed the vascular of the spinal cord are retained.

Vascular pathology of the lungs

First malformation localized in the lungs, described in 1897.

Pathology is called differently, depending on their characteristics: 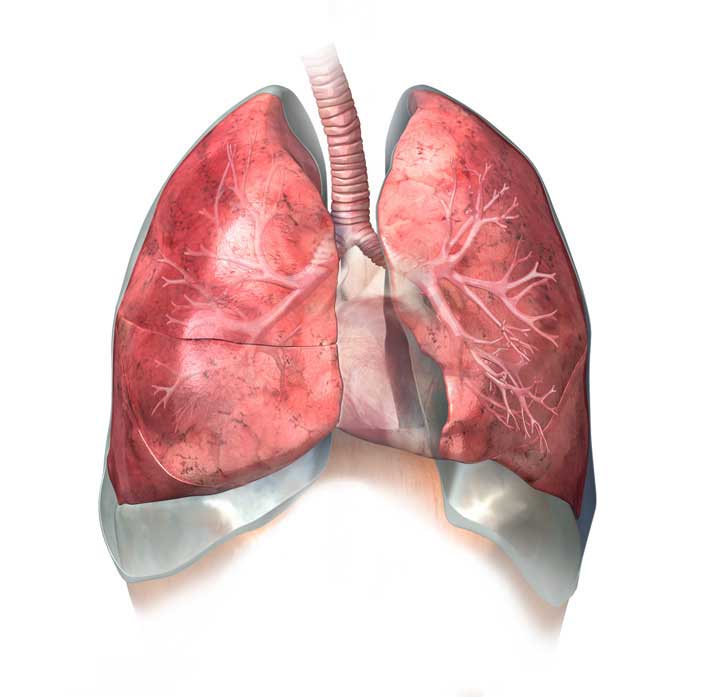 The pathology of the pulmonary vascular is a rare congenital disorder. On average, clinics see more than one such patient per year.

The symptoms vary, in mild cases, the condition shows no symptoms, severe - there is a constant shortness of breath, respiratory distress, marked cyanosis and thickening of the phalanges. The manifestation of hemoptysis is not a complication, it is only a concomitant symptom, it rarely leads to mortality.

98% of the patients in the lower lobe of the lungs is detected by the oval formation. When multiple malformations of the lung, x-ray shows 8-12 or more entities. To visualize the feeding arteryyou can use a CT scan.

The pathology of the pulmonary vascular show these symptoms:

Vascular anomalies of the lung are progressing with age and have poor prognosis. The main treatment is surgical intervention for embolization of the artery or its resection. Fewer complications gives the treatment by embolization of special spirals, removable cartridges.

This type of pathology manifested by the formation of lumps under the skin such as moles or more, newborns are often localized on the head and face. Diagnosed by visual inspection and are called hemangiomas. Rapid growth is possible from birth to 3 months. Surgical treatment successfully, but often fraught with relapses. In Germany, successfully applied embolization of feeding vascular.

Early detection and treatment reduce morbidity, mortality and improve the condition of patients.