Treatment of angiopathy of the retina of both eyes 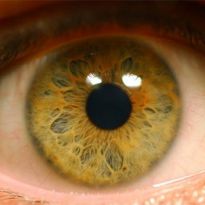 When certain chronic diseases in addition to disorders in the organs, develops and systemic vascular lesions. The process involved not only large but also small vascular - capillaries. So there is angiopathy of the retina, characterized by a disorder of the nervous regulation and circulation in the blood vascular.

It occurs in both adults and children, but the most likely development after thirty years.

The types of angiopathy of the retina

Coming in retinal vascular change is one of the manifestations other pathologies, therefore, include a angiopathy of the retina independent disease is not. It is considered a complication and with adequate and timely therapy dominant pathologies can be cured completely or significantly weakens the current.

Klassificeret its "binding" to the underlying disease:

Hypertensive angiopathy, as is clear from the title, steadfastly develops with elevated BP. The fundus examination reveals irregular narrowing and widening of the arteries. On the eyeball seen small hemorrhages.

At the initial stage of pathological changes in the retina fully disposable-all you need is a systematic monitoring and effective treatment of hypertension.

Without treatment, degenerative processes in the vascular progress, which inevitably leads to a complete loss of vision. 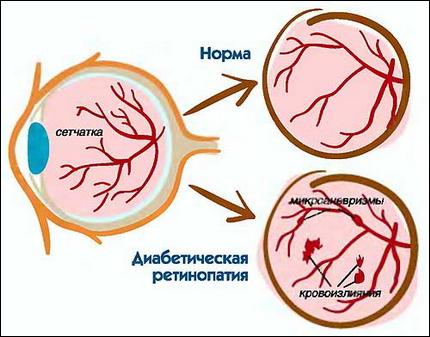 When microangiopathy thinning of capillary walls, while macroangiopathy affects the veins and arteries of the eye. The result is persistent deterioration of vision until complete blindness.

Angiopathy accompanies traumatic injury of the thorax, the cervical vertebrae. Often this pathology develops due to degenerative disc disease, when the nerve endings in the neck of the head is constantly violated, which causes impaired blood circulation and oxygen starvation of tissues.

There are also youth angiopathy of the retina (a disease of the eels'). Its origin is not fully understood. This pathology is characterized by inflammation of the veins, hemorrhages into the retina and vitreous. In the future, it is often complicated by retinal detachment, glaucoma, cataracts.

It most often developsangiopathy of the retina of both eyes.

Causes and factors influencing the development

Most causes angiopathy directly associated with diseases, which were discussed above. However, there are factors that drastically increase the probability of beginning and further development of the pathology:

Manifestations of pathological changes in the retinal vascular can be both visual and occur in the form of personal experiences of patients or abnormalities in clinical tests.

The complaints of the patient force the doctor to suspect a angiopathy of the retina. The assumption is confirmed by ophthalmological examination (examination of the fundus.

Treatment of angiopathy of the retina

Because angiopathy is not a independent disease, and the success of treatment directly depends on the success of therapy of the main diseases that determine its development.

So, for hypertensive angiopathy and its successful treatment is associated with how effective the treatment of hypertension.

The development of angiopathy of the retina of both eyes with diabetes can be quite successful to delay in time or control, subject to the special low-carb diet is based on diet diabetics. Desirable and moderate exercise.

Traumatic angiopathy, due to developing a running degenerative disc disease of the neck or injuries to the chest, can extend itself or its symptoms may subside during the treatment of the trauma.

Professionals prescribe drugs that improve blood circulation in the tissues of the retina, most often recommended trental (pentoxifylline), pentelic, basophil, solkoseril, arriflex. However you need to remember that without control of the underlying disease, resulting in pathological changes in the blood vascular of the retina, these funds will not have a significant effect.

A good result (but only under the control of the disease-causes) given physiotherapy - magnetotherapy, reflexology, laser irradiation.

Angiopathy almost never occurs by itself (except for Junior forms), however, its progression leads to a decrease or loss of vision,therefore, persistent frustration, bruises to the eyes, and other clear violations shall be cause for immediate access to specialists.

As diabetes often occurs in diabetic angiopathy of the lower extremities.