Transposition of the great arteries 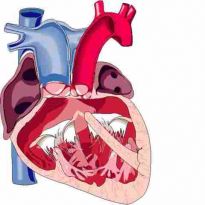 Transposition of the great arteries - a congenital heart defect, one of the most difficult and, unfortunately, the most common. According to statistics it is about 12-20% of congenital disorders. The only way to treat the disease is operating.

The reason for the appearance of pathology is not installed.

The human heart consists of two ventricles and two Atria. Between the ventricle and the atrium has a hole, closed by a valve. Between the two halves of the body, the partition solid.

The right and left parts of the heart served by small and big circles of blood circulation, respectively. From the right ventricle is supplied blood in the pulmonary arterial vessel, moves to the lungs, and then enriched with oxygen returns to the left atrium. From here it is passed into the left ventricle, which pushes oxygen-rich blood into the aorta.

Two circles of blood circulation are connected with each other only through the heart. However, transposition of the great arteries changes the picture.

Under the transposition of the major blood vascular are reversed. The pulmonary artery transports the blood to the lungs, the blood is saturated with oxygen, but falls into the right atrium. The aorta from the left ventricle drives blood around the body, but Vienna returns blood to the left atrium, from where she transmitted the left ventricle. As a result, the circulation of the lungs and the rest of the body are completely isolated from each other.

It is obvious that this condition is a threat to life.

In the fetus the blood vascular serving the lungs are not functioning. In a large circle, the blood moves through the arterial duct. Therefore, TMS is not an immediate threat to the fetus. But after the birth of the children with this pathology becomes critical. 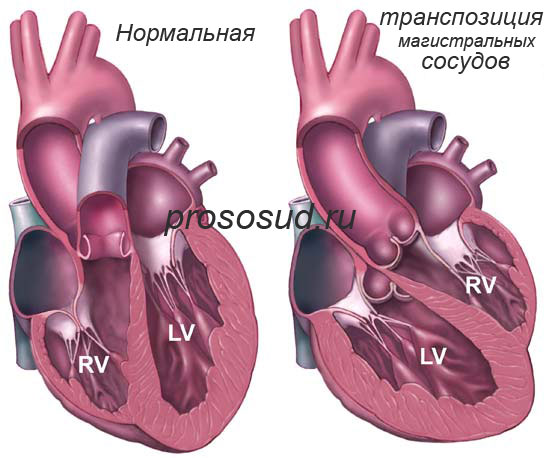 The life expectancy of children with TMS is determined by the existence and size of holes between the ventricles or Atria. This is not enough for normal functioning, causing the body attempts to compensate by increasing the volume of pumped blood. But the workload quickly leads to heart failure.

The child's conditioncan be satisfactory even in the early days. Obvious external symptom in newborns is only distinct cyanosis of the skin - cyanosis. Then develops shortness of breath, increase of heart, liver, edema. On radiographs noticeable changes in the tissues of the lungs and heart. The discharge of the aorta can be observed with angiography.

The disease is of three main types. The most severe form is a simple TMS where the transposition of the great vascular is not kompensiruet additional heart defects.

Simple TMS - complete replacement seats to major blood vascular, small and large circle is completely isolated. A child is born full-term and normal, as in utero fetal blood mixing was carried out through a patent ductus arteriosus. After birth in children, this ductus closes, as it disappears need. 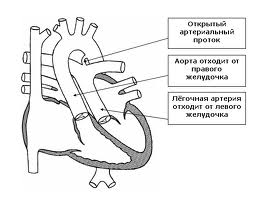 In simple TMS duct is the only way of mixing venous and arterial blood. Developed a number of products that support duct uncovered to stabilize the situation a little patient. In this case, urgent operative intervention is the only chance of survival for the child.

Transposition of the great arteries with VSD or predserdnuu partitions - added to pathology an abnormal hole in the septum. Through him there is a partial mixing of blood, that is, the small and the large circle still interact. Unfortunately, nothing good this kind of compensation does not.

Its only advantage - the situation of children after birth remains stable for several weeks, not days, allowing you to accurately identify the pattern of pathologies and the design operation.

The defect size of the partition can be different. For small diameter symptoms defect is mitigated somewhat, but there are and allow it to establish the diagnosis. But if the exchange of blood is sufficient for a child the number, as it seems quite prosperous. Unfortunately, this is not so: the pressure in the ventricles is aligned over a connecting hole, which causes pulmonary hypertension. Lesions of the vascular of the pulmonary children develop too quickly, and with their critical condition, the child becomes inoperable.

Corrected transposition of the great vascular - change of order of arteries, and ventricular depleted venous blood is in the left ventricle and adjacent pulmonary artery. The blood sated with oxygen is passed into the right ventricle, where the aorta is moved in a large circle. That is, the circulation thoughatypical scheme, but carried out. On the status of the fetus and unborn child corrected transposition of the great vascular are affected.

Such a state is not a direct threat. But in children with pathology usually shows some lag in development because the right ventricle is not designed to serve a large circle and functionality it is lower than the left.

The identification of pathology

Transposition of the great arteries is detected in the early stages of fetal development, for example, using ultrasound. Due to the peculiarities of blood supply of fetal disease before birth does not affect the development and does not manifest itself. Asymptomatic this is the main reason for not detection of diseases before the moment of birth.

To diagnose newborns, use the following methods:

In identifying abnormalities in the fetus almost always raises the question of abortion. No other options except surgery do not exist, and transactions of such level are made only in specialized clinics. Ordinary hospitals can offer only the operation of Rashkind. This allows you to temporarily stabilize the condition of children with congenital heart disease, but treatment is not.

If pathology is found in the fetus, and the mother insists on carrying, the first thing to take care of the translation in a specialized hospital, which will be an opportunity immediately after birth, make the necessary diagnosis.

Transposition of the great arteries can be cured only by surgery. The best time according to surgeons - in the first two weeks of life. The more time that passes between birth and surgery, the more disrupted the heart, blood vascular and lungs.

Operations for all types of TMS developed for a long time and successfully carried out.

Patients with TMS must be under the supervision of a cardiologist even after the most successful operation. The growth of children complications can occur. Some limitations, for example, the ban on physical activity, needs to be maintained for life.

Transposition of the great arteries is a serious and life-threatening heart defect. In case of doubt in the status of the fetus should insist on a thorough examination using ultrasound. No less attention should be paid to the condition of the newborn, especially if cyanosis is watching. Only timely surgical intervention is a guarantee of a child's life.