Stent in the blood vessels of the heart 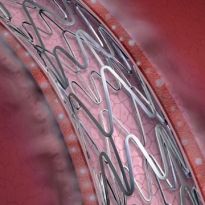 Atherosclerotic plaque deposited in the blood vascular of the heart, break not only the heart but the whole circulatory system. They constrict the lumen of blood vascular, thereby creating an obstacle to the free movement of blood. Help to restore the normal blood circulation stenting vascular of the heart - modern medical technology that allows them to expand the lumen without heavy in every sense of the operation.

What is vascular stenting

Stenting is an extension of the affected vascular of the heart to its normal diameter, held with a stent - a thin wire mesh tube that is inflated with a special balloon inside the patient's vessel.

The balloon presses the atherosclerotic plaque, "prespectiva" it to the vessel wall and thereby releasing the clearance. The blood begins to circulate normally, and the patient permanently gets rid of angina attacks and the risk of developing a heart attack.

In fact, reading is only one: diagnosed on the basis of complaints and patient survey data the narrowing of the walls of the coronary arteries due to atherosclerosis.

Contraindications for stenting vascular of the heart

One of the most significant advantages of a technique of stenting vascular of the heart - a lack of unconditional (absolute) contraindications to its conduct. The exception, perhaps, is only the refusal of a patient. 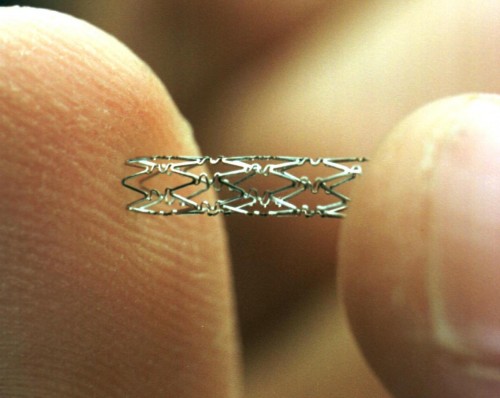 But relative contraindications do exist, but experts always take into account the severity of co-morbidities and are taking steps to minimize their impact on the outcome of the operation of stenting.

Among the relative contraindications for coronary stent includes:

In each of these cases is conducted, the preparatory treatment, the purpose of which is to reduce the risk of complications in the patients organs and systems.

The benefits of stenting over other types of operations

The main methods of expansion affected with atherosclerosis are bypass grafting and stenting.

Bypass grafting - a surgery involving incision of the chest, followed by stitches and a long rehabilitation period.

Stenting vascular of the heart is devoid of these shortcomings because such an operation:

However, with all the obvious advantages of the method of stenting specialists in some cases they make a choice not in his favor, dwelling on bypass surgery. Here are all individually and depends on the condition of the patient, severity and the area affected vascular and atherosclerotic plaques.

Preoperative evaluation and diagnosis include data collection of clinical tests and hardware diagnostics. Patients hand over the General analysis of blood and biochemical test, and pass:

About this procedure should be discussed separately. Coronary angiography stenosis (narrowing) of blood vascular of the heart is the most informative method of diagnosis of IBS, which gives the ability to accurately determine not only the place of narrowing of the vessel, but also the nature, the degree of narrowing.

With existing chronic diseases of other organs is assigned an additional examination.

Stent operation performed on an empty stomach, so eating stops for a few hours before her. Three days before surgery, patients find a clopidogrel - a drug that prevents the formation of blood clots. He accepted all this time.

If the place of insertion of a stent is selected on the foot (which is often), before the operation shave the groin area, since all manipulations will be conducted at the site of the femoral artery.

After injection of the anesthetic is done incision in the leg or arm, which is then introduced through the Introducer - plastic tube. It is used for entering all other necessary tools. 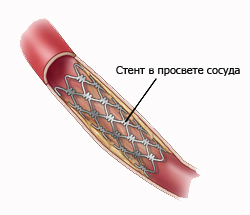 Through the sheath to the damaged vessel, a catheter - a long tube. The catheter is placed in the coronary artery, and then through him introduced the stent with a deflated balloon.

Under the pressure of the injected contrast agent inside the balloon is inflated and expands the vessel lumen. The stent remains in the vessel forever.

The duration of surgery depends on the severity and extent of vascular lesions and can be several hours.

The operation is performed with the obligatory x-ray control, giving the ability to pinpoint the location of the stent with a balloon.

A conventional stent is a thin metal tube, inserted into the cavity of the vessel and inclined to the "ingrowth" into the tissue after a certain time. Knowing this feature, the experts have createdthe drug-eluting stents. It prevents the ingrowth of the tube, significantly increases the service life of the stent and improves the prognosis of the patient's life.

However, in the last time there was dissolving stents, which gradually disappear within two years. They are designed to prevent disruption of the natural oscillations of the vessel during contraction of the heart muscle and to eliminate interference with the further bypass surgery.

Despite its minimal invasiveness, stenting may be accompanied by complications of different severity. Most likely they patients-diabetics, and also those who have kidney disease and coagulopathy - a clotting of the blood. These patients immediately after the operation placed in the chamber of it and very controlled by specialists, while the threat exists. 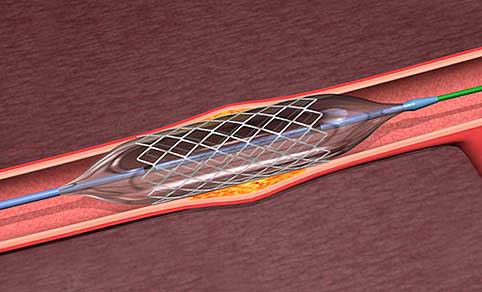 The most frequent complications of stenting vascular of the heart:

However, the most serious danger to the life of the patient is a thrombosis of the stent. This complication can develop in any of the postoperative stages and is characterized by a sudden pain. If you do not take measures in time, possible heart attack.

In the postoperative period of patients undergoing vascular stenting, is assigned to bed rest for a few days with the limitation of the limbs, where the operation took place. Usually this period lasts two or three days, after which the patient is discharged from the Department.

The future well-being of patients depends largely on how strictly they will adhere to medical prescriptions for the supply, loads and taking the necessary medications.

Drugs are recommended individually, depending on comorbidities, but there is one thing that applies to all. Is - clopidogrel. It thins the blood and creates an obstacle for the formation of blood clots inside the stent.

Clopidogrel is mandatory and its duration from six months to two years.

To slow the progression of atherosclerosis, patients have to completely give up bad habits and up to the end of life to follow a special diet under regularcontrol cholesterol - a substance from which are formed atherosclerotic plaques.

It is recommended to completely abandon or reduce to a minimum the consumption of fatty, fried, smoked and spicy food, alcohol, fatty sauces, muffin, fast food.

Stenting is minimally invasive and gentle operation, allowing you to quickly and permanently restore circulation in heart vascular, but its efficacy largely depends on the future behavior of the patient: moderation, carefulness and strict adherence to medical recommendations will guarantee a high quality of life in the future.

We recommend you to read the material about what are the causes of atherosclerosis.