Manifestations and treatment of post-infarction cardiosclerosis 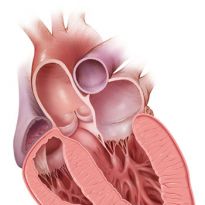 In 100% of cases after myocardial infarction postinfarction cardiosclerosis develops. If the literal to explain the concept of a heart attack, it is a tissue necrosis in any part of the heart. Over time, heart tissue is vulnerable to necrosis is replaced by connective substance.

It is the disease is regarded as a cause of the following diseases:

Symptoms of the disease will be determined by one of these types of disorders of the heart.

Chronic heart failure is a condition in which the attenuated contractile activity of the heart muscle and the heart is unable to provide the body with sufficient amount of blood. On the background of postinfarction cardiosclerosis and chronic cardiac failure develops slowly, over the years, gradually reducing the patient's quality of life.

According to the classification of Strazhesko-Vasilenko release:

There is still the new York CHF classification, which identified 4 functional class, respectively, from mild to the most severethe course of the disease.

Forecast CHF adverse in the latter stages. CHF N 3 stages are often defined as cause of death in the elderly population. According to statistics it is believed that the patient with post-infarction cardiosclerosis and developing on the background of insufficiency, life expectancy is reduced by 5 - 7 years. 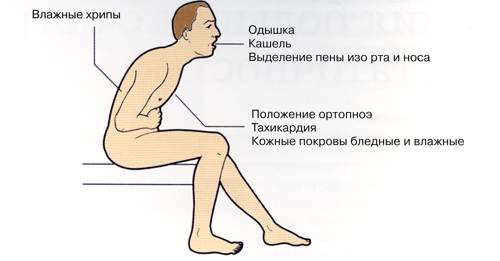 Dyspnea - rapid shallow breathing, feeling of shortage of air. This condition occurs due to increased pressure on a small circle of blood circulation (pulmonary parenchyma) and leads to impairment of gas exchange. Shortness of breath may be associated with other pathological conditions - anemia, obesity, pulmonary pathologies, therefore, treat it as the main symptom of CHF is only after their exclusion.

Paroxysmal nocturnal dyspnea occurs after 3 to 5 hours from the start of the night. This increases vnutrigrudne pressure as in a horizontal position increases the intrathoracic blood volume. Reduced lung capacity. The patient wakes up, sitting up in bed, begins to cough. Attack docked half an hour later from the beginning. Gradually, people is forced to sleep position - sleeping half-sitting.

It is clear that the intensity of the symptoms of heart failure increases depending on the stage of the disease. If myocardial infarction develops on a large plot of cardiac tissue for example after a transmural or large-focal myocardial infarction, the prognosis cannot be called prosperous. In such cases, a high probability of sudden death of the patient.

Depending on the size and number ofconnective tissue scarring can lead to various heart rhythm disturbances. Varieties of rhythm disorders quite a lot, most of them presented symptoms increase or severe decrease in heart rate.

Important post-infarction cardiosclerosis you follow a special diet. The amount of fluid reduce to half liter a day limit requires salt.

Salt intake should be no more than 3 grams per day. Take place periodically weighing the patient. The weight gain is a Testament to the delay of excess fluid in the body. In this case you should increase the dose diuretics.

To limit in the diet have foods that contain animal fats, cholesterol, salt. In addition, you should increase the intake of fiber contained in the peas, beans, beans, beets, cabbage. Foods rich in polyunsaturated fatty acids to consume it is necessary. This saltwater fish, seafood, seaweed, vegetable oil (better olive, and mustard), berries, vegetables, fruits.

Patients with post-infarction cardiosclerosis is necessary in many respects to change their habits, but this affects the life expectancy.

I advise you to read a separate article about what a dangerous infarction.