Home / Diseases associated with vascular dysfunction of the heart / Cardio 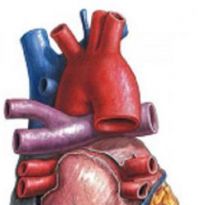 "Scars on the heart" - a spectacular artistic technique for many endured hardships, is really not that much of a metaphor: in medicine it is cardio, cicatricial changes in the tissues of the myocardium.

Normal tissue of the myocardium - the heart muscle is thick and consists of cardiomyocyte - specific cells that provide the contractility of the heart and the right heart.

Due to atherosclerotic, infectious or rheumatic it appear bleeding sites subjected to prolonged oxygen starvation, which subsequently nekrotizirutee (die).

On dead areas of the cardiomyocytes die and their place is taken by connective tissue, visually defined as scars. The scar tissues block the flow of blood in the blood vascular of the heart because the connective tissue has only a protective function.

So developing atherosclerotic cardiosclerosis, as well as other varieties of scarring tissue of the myocardium.

Cardio brings together a group of sclerotic changes occurring in the heart muscle as a result of:

In accordance with the above reasons in cardiology there are the following types of cardio:

Diffuse cardiosclerosis - uniform necrosis and tissue scarring of the myocardium, eventually spreading across the heart. Distinguish its history of large and small forms. 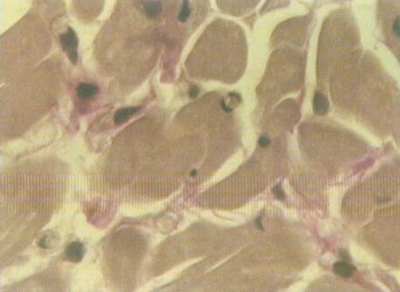 The main cause of disease - ischemic heart disease, occurring on the background of atherosclerotic lesions of vascular or developed inflammatory process in the tissues of the myocardium.

Diffuse microfocal cardiosclerosis due to coronary insufficiency (disease of the coronary vascular of the heart) occurring for a long time.

To large-focal forms include sclerotic changes occurring as a result of coronary artery disease. This is quite a large areas of the heart affected by necrosis.

Symptoms of diffuse cardiosclerosis are not of a specific nature to suggest this form of pathology:

The disease is diagnosed using ECG, echocardiography and research on MRI, which detect the increase in the left ventricle, arrhythmia, and affected multiple sclerosis areas of the heart.

Therapy involves the treatment of IBS with the aim of braking the further expansion and increasing the number of affected areas, control of arrhythmias and chronic heart failure.

In the scheme of treatment is required to be included on a special diet aimed at lowering blood cholesterol level and normalizing the blood pressure. It consists of plant foods, cereals from whole grains, mild sauces, breads flour, homemade fortified drinks - compotes, herbal teas and juices.

However, whatever the cause of nor caused a heart attack, myocardial infarction becomes a prerequisite for further changes in the structure of the tissues of the heart, the size of its cavities, which entails a significant increase in symptoms.

The disease has symptoms similar to the manifestations of infarction, developed on the background of ischemic heart disease, but they are more pronounced: 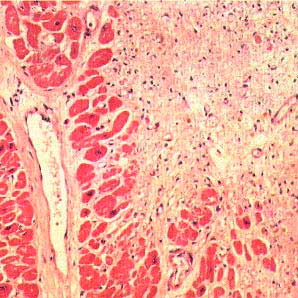 These methods allow to estimate the proportion of the degeneration of the tissues of the myocardium, to detect the degree of narrowing of the coronary arteries, to determine the ejection fraction of the left ventricle.

Calculation of the fraction of the left ventricle allows to predict the further course and outcome of the disease.

Myocardial infarction requires treatment aimed only at preventing the spread of necrosis to other areas of the heart, as to restore the vitalitydead tissue is impossible.

Patients are also prescribed a strict diet and a complete rejection of any bad habits, exercise.

The heart muscle often suffers not only from atherosclerosis but also from defeat infections, rheumatic fever, diffuse diseases of connective tissue, allergic reactions - for example, on certain types of vaccines, serums, drugs.

Under their influence, developing myocarditis - inflammation of heart muscle. Among the manifestations of myocarditis is pain in the heart, arrhythmia, tachycardia, shortness of breath, a small but steady body temperature. Sometimes the disease can occur without obvious symptoms.

Exists and idiopathic form of myocarditis, which sometimes takes a malignant character: develops cardiomegaly (significant increase in heart size due to the pronounced expansion of its borders). 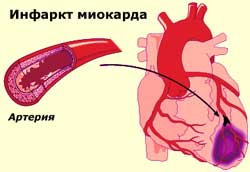 If to the above symptoms is added the formation of mural thrombi in the cavities of the heart, in large and small circles of blood circulation, can develop postmyocardial cardio the complication of the current or recent myocarditis.

This type of sclerotic pathology of the myocardium characterized by the following symptoms:

And if the above types of sclerotic changes occur in adults (elderly) patients, postmyocardial cardiosclerosis may develop in children and adolescents on the background of rheumatism, acute and chronic viral, bacterial and herpetic infections.

Postmyocardial sclerosis needs therapy aimed at alleviate the disease we have to deal with the phenomenon of arrhythmia, swelling, to stop attacks of angina.

Patients are assigned to specific drugs, some of which are taken courses, others for life. Not last role is played by diet, designed to reduce stress on the heart and blood vascular, with the use of diuretic teas, fruits, and vegetables rich in potassium and magnesium.

Atherosclerotic plaques formed on the walls of the blood vascular of the heart, creating obstacles to the normal blood circulation and proper nutrition of the heart, brain and other organs with oxygen and nutrients.

Accumulation of cholesterol cause the heart to exert more effort to push the blood, sothe left ventricle increases in size, and heart tissues begin to experience hunger. Depleted myocardium is covered ishemizirovanne areas, which subsequently die. 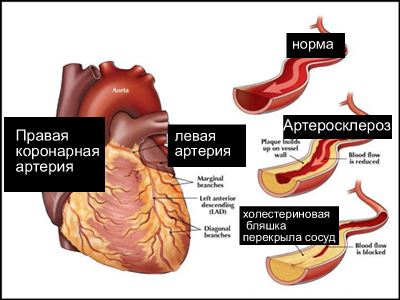 In this disease there is a gradual replacement of the necrotic area with the connective tissue, which is formed in the rough scars that violate the contractility of the heart.

When examining patients reveal enlargement of the heart and the displacement of its boundaries to the left, also identifies atrial fibrillation, extrasystoles.

The clinical picture of this pathology consists in the following set of symptoms:

Atherosclerotic cardiosclerosis is also accompanied by resistant hypertension, disorders of the brain and other organs because they also experience anoxia.

To diagnose the disease using ECG, ultrasound, MRI methods that allow to assess the nature and area of damage to the heart muscle, to predict the further course of the disease.

As already nekrotizirovanne areas of myocardium, as well as any dead tissue, can not be recovered, atherosclerotic cardiosclerosis treated symptomatically - that is, trying to reduce blood pressure to normal, the convergence swelling, improve heart rhythm.

We need to be realistic: atherosclerotic cardiosclerosis, like other forms of education cicatricial tissue on the myocardium are not fully cured - at least because to anyone else in the world could not revive that which has died.

However, traditional medicines, coupled with stringent antiatherosclerotic dety, readjustment of foci of chronic infections and other therapeutic measures can significantly ease the condition of patients and improve the quality of life.

The use of folk remedies as aimed solely at alleviating symptoms of cardiosclerosis as a professional therapeutic action:

To deal with the deposits of cholesterol help pumpkin juice, infusions of rose hips, a decoction of the flowers of buckwheat.

Good folk remedy for atherosclerosis - the tincture or decoction of the Golden mustache: due to the large number of anti-oxidants this medicine helps to accelerate the purification of the body, improve immunity, normalize metabolic processes.

The recognized leaders among all known vegetables that help to fight against atherosclerosis - the tubers of Jerusalem artichoke: they are washed, cleaned, rubbed on a fine grater and squeeze the juice which you should drink half a Cup three times a day before meals.

For those who loves garlic, it can be an indispensable tool: it can be eaten raw, as well as to make a garlic oil, Gulf pulp from one head of garlic Cup of refined vegetable oil and allowing to infuse for a week in the fridge.

Eat a teaspoon after each meal for three months.

Cardio is the finale of years of complacency and legkomyslennyj to their health: there comes a time when patient and hardworking heart can not stand and begins to slowly die. Prevent scarring on it - they are spectacular only in the form of vivid metaphors, but in life bring a lot of suffering. Take care of your heart!