Treatment of disorders of cerebral circulation 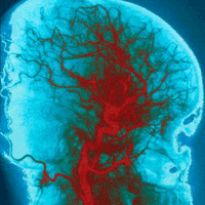 The condition, called ischemic stroke in the acute form, is one of the major causes of mortality in developed countries. According to statistical data annually suffer a stroke more than 6 million people, a third of which as a result of the disease.

Causes of disorders of cerebral circulation

Of the vascular pathology causing the cerebral circulation, can be very different:

Talk about cerebral vascular insufficiency possible in all cases when the amount actually transported to the brain blood is not the same as necessary.

Statistically the most common problems of blood supply causes the sclerotic vascular lesions. Education in the form of a plaque interferes with the normal passage of blood through the vessel, compromising its capacity.

If treatment will not be appointed in time, plaque will inevitably accumulate platelets, thereby to grow in size, eventually forming a clot. He will either block the vessel, preventing blood flow through it, or tear the blood stream, after which it will be delivered in a cerebral artery. There it will clog the vessel, causing acute ischemic stroke, called stroke.

The clinical picture for each of the types of vascular problems may have a different view. But all exhibit the common signs that indicate a loss of functionality of the brain.

To ensure that the treatment was most effective, it is necessary to identify all significant symptoms, even if the patient is confident in their subjectivity.

For violations of cerebral circulation, characterized by the following symptoms:

Each of the problems of cerebral blood flow has its own symptoms, treatment depends on the clinical picture.

So, in ischemic stroke, all the symptoms are very acute. Patient complaints are bound to be subjective properties, including severe nausea, vomiting or focal symptoms, signaling violations of those organs or systems, which meets the affected area of the brain.

Hemorrhagic stroke occurs when blood from a damaged vessel in the brain. Then the liquid can squeeze the cavity of the brain, which causes a variety of damage, often resulting in a fatal outcome.

For chronic cerebral circulation characterized by slow development over many years. Therefore, patients are most often elderly people, and treatment of the condition must take into account the presence of comorbidities. Common symptoms - reduction of intellectual abilities, memory, ability to focus. Such patients may differ increased aggressiveness.

Diagnosis and subsequent treatment status is based on the following parameters:

Treatment of obstructions of the cerebral circulation

Cerebral circulatory disorders with acute, require immediate treatment to the doctor. In the case of stroke emergency care is aimed at maintaining vital organs and systems of the person.

Treatment of vascular brain problems is to ensure the patient normal breathing, blood circulation, removal of edema, correction of arterial pressure, normalization of water-electrolyte balance. For all these procedures, the patient should be in hospital.

Further treatment of the stroke would be to eliminate the reason of the difficulties of blood circulation. In addition, will be adjusted to the total blood flow of the brain and the restoration of the areas affected.

According to medical statistics, timely proper treatment improves the chances for the full recovery of victims of stroke features. About a third of the working patients after rehabilitation can return to his work.

Chronic cerebrovascular disease treated with medicines that improve blood circulation. Parallel to prescribed treatment, normalizing blood pressure, cholesterol level in the blood. In the case of chronic disorders shows and self-memory training, concentration, and intelligence. Among such classes can be called reading, memorizing texts by heart, and other intellectual exercises. To reverse the process impossible, but the patient may not allow the worsening of the situation.

Maybe you will be interested. A very similar disorder is called: cerebral angiodystonia vascular of the brain.