Consequences of ischemic stroke in the brain 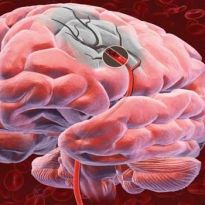 Cerebral infarction is a pretty scary diagnosis, but often this disease overtakes older people, which age jumped over the 60-year bar. The second name of the disease - ischemic stroke.

Surprising fact: the disease can be affected patients who in the past complained of arterial hypertension. With timely treatment to the clinic the prognosis may be quite favorable - known cases of complete recovery of patients.

Detailed study of ischemic stroke, symptoms and its causes, and methods of first aid, you may one day save not only his but also the lives of others. 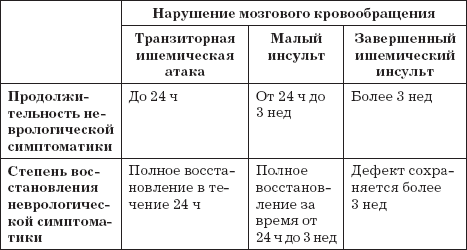 And here is the classification of disease with regard to its severity:

Focusing on the pathogenesis, the doctors have identified several manifestations of cerebral infarction.

According to this classification, the stroke is divided into: 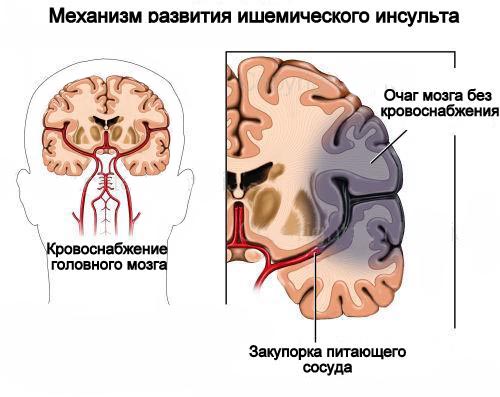 Ischemia is a complex multistep process.The disease can last for years and is divided into five periods:

It often happens that the cerebral infarction occurs due to overlapping of blood flow by embolus or thrombus. Cerebral blood circulation is disturbed, and the patient is feeling the impact of the atherosclerotic process. Often from ischemia affects people who have had transient ischemic attack and is now prone to hypertension. 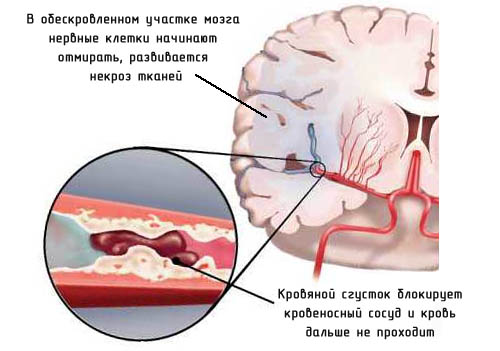 There is a whole layer of chronic illnesses that can lead to ischemia. No wonder the angina pectoris, the treatment of which folk remedies has become widespread, it is considered a Wake-up call. Most of the problems lies in the field of cardiovascular system.

How to recognize ischemia

The patient can feel the approach of the disease as ischemic stroke and its symptoms are felt typical ailments: 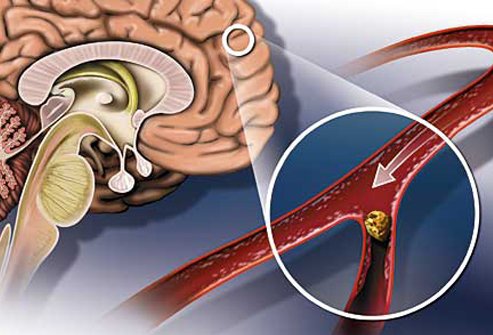 Sometimes the patient's face may be beveled, it is a clear sign that requires immediate medical intervention.

Speech disorders, which caused an ischemic stroke, is called "aphasia". There are some differences symptoms in left and right handers - it depends on what kind of hemispherebrain damaged.

When blockage of the basilar artery blood ceases to flow in the respiratory and vasomotor centers, which leads to a number of bad symptoms:

The cerebellum is responsible for coordinating our movements. Therefore, his defeat has the following consequences:

Ischemic stroke whose treatment was not properly carried out, is fraught with serious complications. Why the disease it is important to recognize in the early stages and prevent its further development.

Here are the most common complications are:

Early diagnosis is a crucial factor that can identify ischemic stroke and differentiating it from similar diseases(subarachnoid hemorrhage, hemorrhagic stroke).

Key methods of diagnosis in the early stages are: 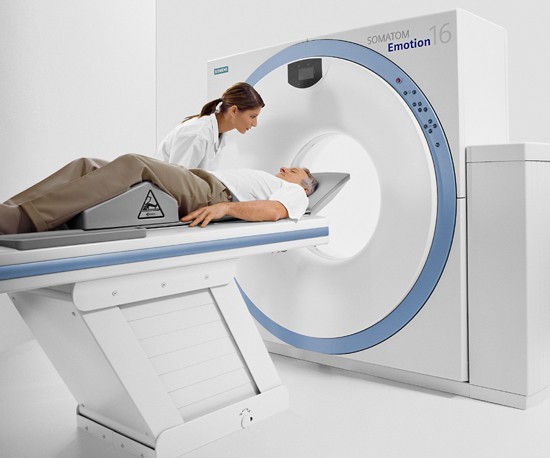 Acute ischemic stroke is visualized using magnetic resonance imaging. In comparison with computed tomography is more accurate method of diagnosis. Tomograms capture ischemic changes already in the first days of the formation of occlusion. If the lesion develops in less than 12 hours, half of the tomograms did not reveal any catastrophic changes.

In some cases, the patient may need a lumbar puncture. Before applying it, the physician should confirm the absence of contraindications. Ischemic stroke involves transparency of the cerebrospinal fluid. The content of cellular elements and protein will be normal. To differentiate cerebral infarction will have two similar movements:

Therapy will depend on the amount, localization and condition of the patient. Ischemic stroke and its treatment can be divided into specific and basic therapy. The basic treatment is based on a set of measures for the prevention of somatic illnesses. The objectives of this therapy are:

Specific therapy involves the use of thrombolysis, fibrinolytic agents, anticoagulants and antiplatelet agents.

Faced with a man who was struck by a stroke, don't panic. To help him you can easily, the main thing - to follow step-by-step instructions.

If your family member was struck by angina treatment of folk remedies do not seem nonsense, and will be one of the options for man's salvation. This harsh truth applies to cerebral infarction. Traditional medicine has the following objectives:

To restore the normal functioning of the limbs, to engage in the manufacture of ointments, which are based on vegetable oil and Bay leaf. A good option would be a Bay leaf, mixed with juniper and butter. For internal use it is recommended tincture of a peony.

Also a good help will be honey liqueur created from onion juice, honey and citrus. The famous garlic tincture also have the way. All these means are permissible during the rehabilitation period, when the danger disappeared, and the patient is recovering from illness.

Primary prevention involves the influence on diseases of the underlying ischemia. With hypertension doctors fight anti-hypertensive drugs. 24 hours, the patient needs to stabilize the pressure. Patients included in the risk group, are under constant surveillance.

Secondary prevention is based on three factors:

Get ready to drink the following drugs:

There are more sophisticated maintenance procedures (up to sessions with a speech therapist). Cerebral infarction is better to push than to put yourself in danger. Try to minimize consumption of cholesterol, more move and weight.