Causes and treatment of the mixed hydrocephalus in children and adults 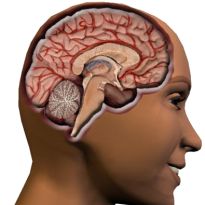 Usually this pathology is associated with a high intracranial pressure (ICP) when the CSF is produced intensively, but is poorly absorbed, causing the development of foci of the disease.

The causes of anomalies

The cause of pathology caused by changes related to the production and movement of CSF. The diagnosis of "encephale" in infants is associated with infections, who were pregnant.

For example, cytomegalovirus it kind of contributes to defective functioning of the ventricles of the brain of the embryo. Depending on the localization, pathology physicians distinguish between internal, external and mixed types of the disease. 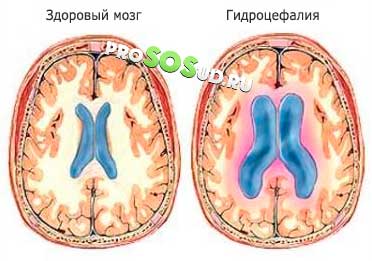 In addition to the congenital form in infants may develop acquired hydrocephalus as a complication of meningitis, intoxication, head injury. Most species of this disease is a consequence of the complicated outflow of cerebrospinal fluid accumulates in the ventricles of the brain.

Depending on localization distinguish:

The type of this serious disease will depend on the choice of methods of treatment - both conservative and surgical.

Features of the disease due to the interaction of certain mechanisms cause the other varieties of dropsy of the brain.

Mixed substitution hydrocephalus usually occurs in older patients with signs of volume reduction of the brain. Its distinguishing feature - the replacement of vacant space by the cerebrospinal fluid. The background for the formation of such pathology are often a concussion, hypertension, atherosclerosis, weakness of the cervical vertebrae, alcohol dependence.

Moderately severe form leads to reduced blood flow. This may be a result of inhibition of many brain functions. If substitution hydrocephalus is accompanied by an increase in the volume of cerebral ventricles, in patients reveal a decrease in ICP, alternative version, it will be increased. 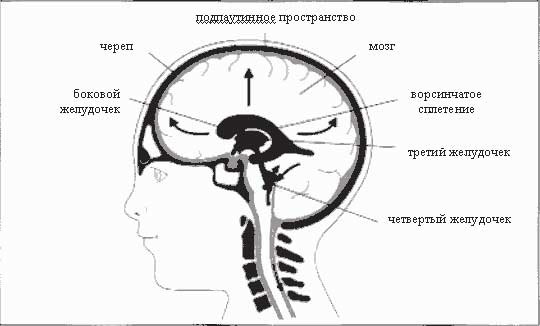 If no complaints, reasonable combined hydrocephalus needs no treatment. Monitor the patient's condition by means of additional surveys. The dynamics of the disease will show an MRI. If the cavity of the spinal fluid increases, the neurologist will recommend diuretics and vasodilator drugs.

If the disease progresses, brain cells die. The patient can offer surgical treatment. In the past have always carried out the bypass surgery, modern technology added to the Arsenal of methods neuroendoscopic operation.

Surgical treatment of this pathology combined as moderate hydrocephalus of the brain is carried out only after consultation with your doctor. If the patient is not receiving proper therapy, subsequently it is waiting for a wheelchair.

Symptoms talking about the ICP:

Symptoms of a mixed hydrocephalus are headaches with maximum intensity in the morning, immediately after waking up. This is due to the increase in sleep pressure.

An important symptom is drowsiness, which plays the role of harbinger of a more dangerous neurological disorders. 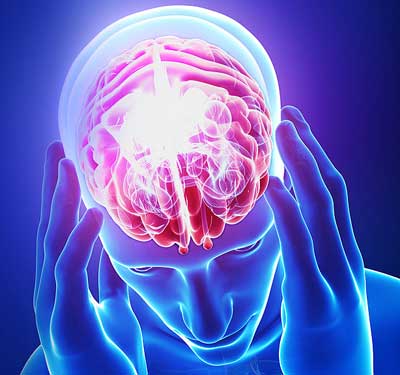 In the formulation of this combined diagnosis as hydrocephalus in adults are celebrated around the head sharp, tearing the skull, pain. Morning sickness accompanied by nausea.

In addition to headaches at the mixed form of atrophic hydrocephalus see a speech disorder, weakness in the legs, epilepsy, impaired memory, particularly remembering numeric information. With any form of hydrocephalus patients passive and passive.

With the progression of the disease, there is a further disorder of the mind, precluding the possibility of self-service. The patient did not adequately respond to simple questions.

In the later stages of the disease possible incontinence. After a thorough examination a correct diagnosis, the doctor prepares the patient's personal treatment plan.

Dropsy of the brain in children - not such and a rare disease: one baby in 4000 newborns. But there's a comforting statistic: congenital hydrocephalus successfully treated with bypass surgery, and children with a tube in the head can live a normal life with adequate exercise.

Outside pathology is considered to be innate. Is treated by medications. If the result is unsatisfactory, performed surgery. 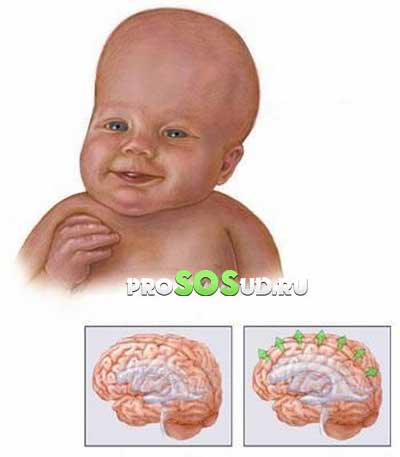 Combined hydrocephalus in children is characterized by accumulation of cerebrospinal fluid under the brain lining and in the ventricles. The principle of treatment therapy that improves cerebral blood flow and lowers intracranial pressure, and use diuretics.

As additional methods are used herbal medicine and massage. Effective and manual therapy. The result is a monthly control on the ultrasound.

The signs of the disease can be detected in problems with breast feeding, difficulty with head turning, frequent restless crying.

But the most obvious symptom is the intensive growth of the skull, regardless of the Constitution of the baby. Hydrocephalic skull shape experienced doctor determines visually. But the last word for a neurosurgeon, clarifying the necessity and urgency of the operation, the chance to cure the child without her.

The surgical treatment administered shunts: it is the excess fluid out into the abdominal cavity. The rate of cerebrospinal fluid regulates the valve. With age, these children need corrective surgery.

When neuroendoscopic operation endoscope with a tiny camera indicates the insertion site of the catheter to the outflow of CSF. So create a backup channel for excess fluid. Re-operation for replacement of tubes is not necessary - they are not there. The innovative method is not as versatile as the bypass.

Patients diagnosed with hydrocephalus are observed by a neurologist with mandatory periodic diagnostics. In milder forms, patients can retire, Kuntsevsky remain under supervision for life.

It is important to remember that hydrocephalus is not a death sentence. If you find an experienced doctor, complete examination, to clarify the type of illness,collect all possible information about it, with timely and correct treatment you can count on a favorable prognosis.