Signs and treatment of aneurysms of the vessels of the head 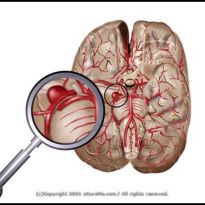 Sometimes in a brain blood vessel is formed a growth - it quickly filled with blood and may burst, which will inevitably lead to death. Is aneurysm of cerebral vascular is an extremely dangerous disease, requiring prompt medical intervention.

Most often, an aneurysm affected artery localized in the base of the brain - the area doctors call millisievert around. Area of potential damage includes carotid artery and their key branches. Rupture of the aneurysm causes a hemorrhage into the brain substance or subarachnoid region.

The greatest danger is subarachnoid hemorrhage - the person it happened live a few hours.

Classification and the development of the disease

Often the disease goes unnoticed, the patient may live for several decades, unaware of the terrible diagnosis. Scenario of development of the aneurysm as follows:

Classification of aneurysms of cerebral vascular depends on a number of factors. With the defeat of various regions of the brain, the doctors distinguish the following types of illness: 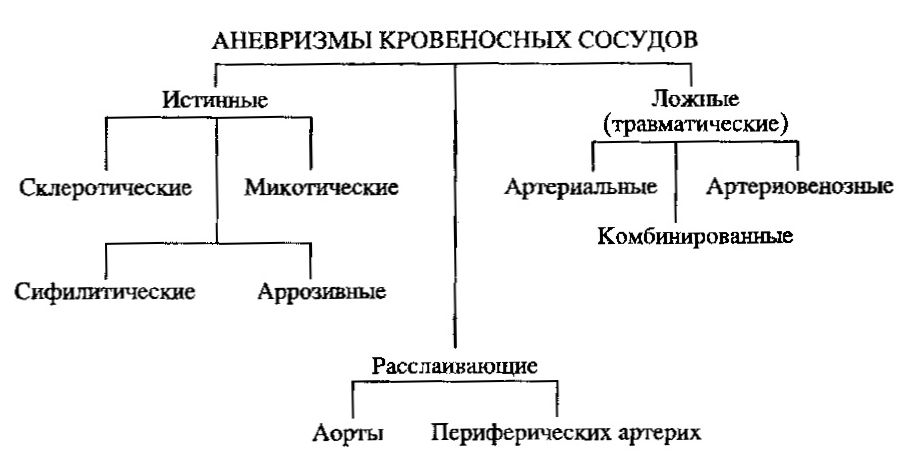 Accurate identification of the area of the disease affects treatment strategy. Therefore, species diagnostic of an aneurysm is extremely important. Structure of of aneurysms is also different - the well-known saccular and fusiform varieties. The latter are divided into single-chamber and multichamber. These formations are classified according to size:

The size of the aneurysm affects the risk of rupture. The larger the education, the higher the chance of a tragic outcome. A brain aneurysm has the following structure: 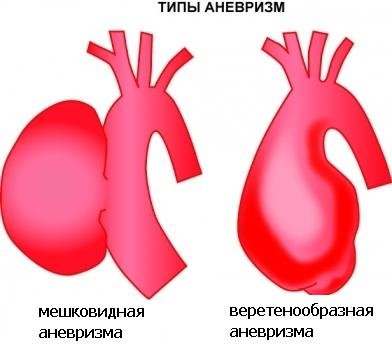 The most robust (sandwich) part is the neck. Membrane shell of the body is underdeveloped - thisthe site is less durable. The dome is the most fragile spot (a thin layer, the breakthrough inevitably occurs).

Fateful changes occur over time, so the disease may "doze off" years.

Weakness of the vascular walls is always triggered by certain factors. On blood fibers increases the load - this leads to the formation of build-up. A genetic aspect, as scientists assume, plays a leading role. To hereditary diseases manifested throughout life, include: 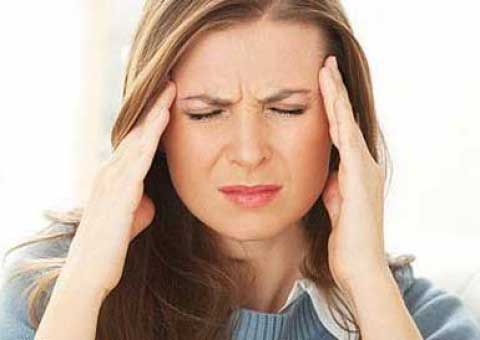 Some people have a predisposition to aneurysm of cerebral vascular. For example, in the United States from 27 thousand patients are annually fixed by the rupture of the aneurysm. Women are suffering illness significantly more often than men, statistics showed that at risk are patients 30-60 years.

Other risk factors are as follows:

Aneurysm progressing with prolonged exposure to one (or several) of these factors. The wall of the artery gradually loses mechanical strength and elasticity, it stretches and bulges Grizedale filled with this blood.

Characteristic signs of aneurysm are observed only in quarter of cases. Among the symptoms are the most common headaches of varying intensity - migrenepodobna, tugging, aching. Symptoms can vary - it depends on the affected area of the vessel. Basic symptoms are as follows: 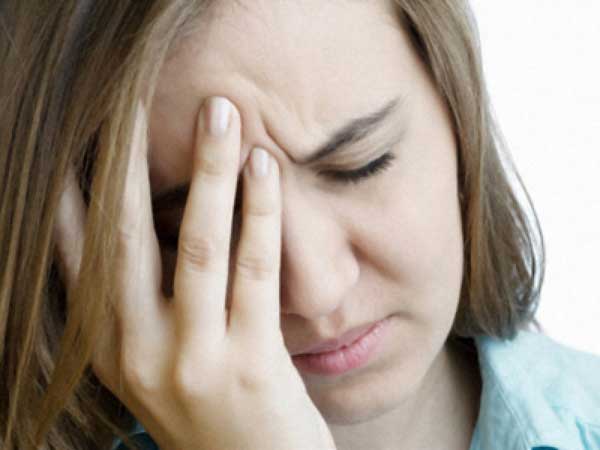 Frequent pain in the head

Paroxysmal migraine of varying intensity, the most characteristic symptom of a brain aneurysm (often the symptom of pain is repeated on the same plot).

If the damage of the basilar artery, the pain may erupt in the side of the head when the affected artery back - suffer the occipital region of the head. There are more specific signs of an aneurysm:

In the process of formation of aneurysms intracranial pressure causes discomfort and leads to the effect of "fullness". There are known cases of tingling in the affected area - they deliver slight anxiety, but it should alert. Rupture of the aneurysm cause severe pain, which, by the testimony of surviving patients, it is impossible to tolerate.

Documented cases of loss of consciousness or temporary dimness - the patient loses spatial orientation and does not understand what was going on. Some patients traced the signal of pain - they flare up for several days before breaking. But in most cases, the rupture occurs suddenly, the patient does not have time to transport to the clinic, so quickly death comes.

The conclusion is simple: having had at least one of the above symptoms, should immediately go to the doctor. Timely diagnosis, proper treatment and surgery can save your life.

The most popular method for the detection of aneurysm is angiography. Unfortunately, not all patients receive timely diagnosis - this leads to disastrous consequences. Aneurysm of cerebral vascular is detected and other instrumental methods. Let's try to briefly describe them.

Intracerebral hemorrhage leads to swelling of the brain. The tissue responds to the disintegration of the blood, develops a necrosis, the damaged areas cease to function. Gradually denied parts of the body, which was formerly run by the affected area. 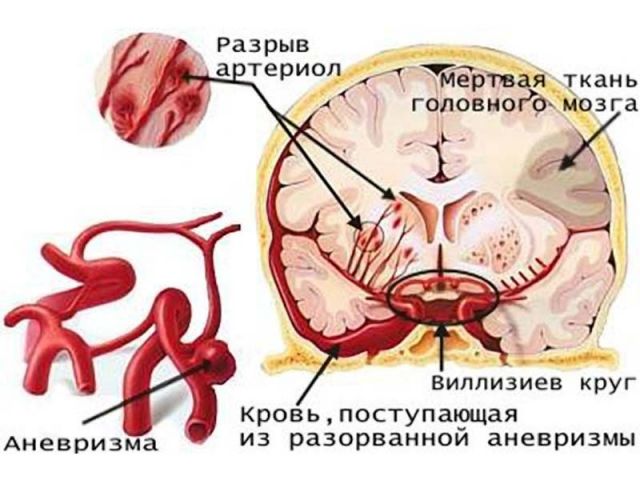 Among other complications can be identified:

To extremely dangerous complications include vasospasm of the vascular. This phenomenon constricts blood vascular, leading to brain stroke. The risk of vasospasm is multiplied in a three-week period, coming in place of the hemorrhage.

Timely diagnosis allows you to regain control over the narrowing of the arteries.

The choice of therapeutic strategy depend on behavioral characteristics of the aneurysm and the affected area, as well as the age and General condition of the patient. If a brain aneurysm has a high density and small size, and complications are lacking, it may be limited to conservative treatment:

Aneurysm detected at an early stage implies a stable therapeutic monitoring and emergency intervention in case of rupture. The state of pathology should be evaluated in the dynamics. Some patients spend all their life under close medical supervision, and of the fatal rupture did not occur.

Surgery remains the most effectivethe method of treatment. In some cases, strengthens the vascular wall, other recommended clipping. Consider all types of these surgical interventions.

Postoperative complications should not be ruled out - they occur often enough. Unpleasant consequences associated with vasospasm and the development of cerebral hypoxia. When obstruction of vessel (full or partial) may occur oxygen deficiency.

Death can occur in the case of the huge size of the aneurysm. If the acute stage has not come, mortality is minimal.

Conservative treatment we have referred to, but the detail on it. The key to the effectiveness of this therapy is constant medical supervision and a strictly individual approach. The drugs used to fight the disease, can be divided into the following groups:

To completely eliminate the risk is impossible. But you can reduce the risk to a minimum, thereby raising their chances. Preventive complex as follows:

The cornerstone of prevention - early diagnosis. This primarily applies to patients with a genetic predisposition. At the slightest suspicion of aneurysm, should immediately go to the clinic.

Doctors recommend in this situation to avoid stress, don't overexert, to avoid overstimulation and to maintain a stable emotional level.

Do not hesitate, in vain resentments and worries, enjoy today and stop conflict with loved ones. Regularly measure blood pressure. Do not ignore suspicious symptoms - further examination never hurt anyone. Early diagnosis and timely assistance is the key to your health.

All this can provoke bleeding in the brain.