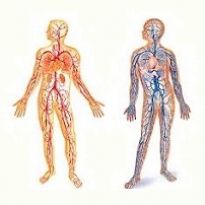 The overall picture of the disease

To vasculitis include all lesions of the vascular - arterioles, veins, arteries, capillaries, having an immunopathological cause. The latter implies a specific violation of the immune system cells mistakenly identifitseerida walls as an alien, and, consequently, attacked.

The release of blood antigens leads to the formation of large amounts of immune complexes. After some time these formations are fixed on the walls, they migrate macrophages and leukocytes, starts phagocytosis, cell lysis, platelet aggregation, which in the end leads to the destruction of an artery, vein or capillary. Vessels become permeable, and in the further course of the disease, begin necrotic changes.

The atypical increase in the number of immune complexes in the blood serum is one of the diagnostic features.

Inflammation of the vessel wall prevents the normal krovopotera, the result of the damaged organ of the body served by the affected vascular. So, with vasculitis of the temporal artery of the brain does not receive oxygen occipital part of the brain, and as a result there are disturbances. And inflammation of the veins of the lower extremities is accompanied by skin rash and joint pain.

The exact cause of the disease remains unknown. We only know that in addition to the autoimmune process, vasculitis, provokes Staphylococcus aureus and hepatitis b virus. Localization is unpredictable. Vasculitis of the lower extremities, blood vascular of the brain, small blood vascular of the kidneys are the most frequent forms of inflammation.

As the disease can be affected by any of the blood vascular and any part of the circulatory system, forms of the disease abound.

The source type of inflammation of the blood vascular are divided into two types: 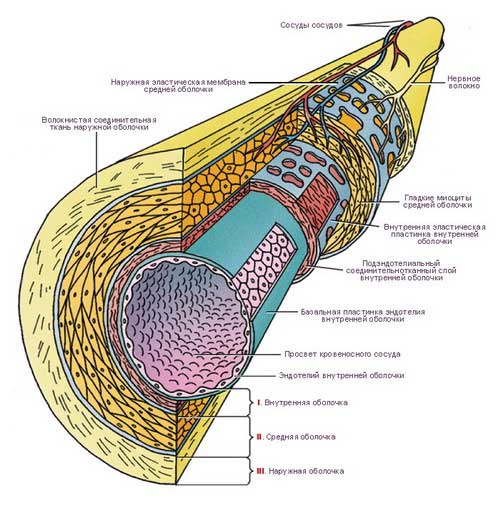 The structure of the vessel wall. Click to enlarge.

Emit and other forms of the disease with a very characteristic signs. Often these diseases have a clear attachment to region or race, for example, Takayasu's arteritis.

This defeat of the aorta that 8 of the 9 cases recorded at the Asian women. Vasculitis of the lower extremities or the brain is far less specific, and, unfortunately, ubiquitous.

The symptoms of inflammation

To identify them is difficult due to the above-described features: the disease is not confined to the destruction of the wall and strikes the body. Of the common signs of the vasculitis characterized by all of the typical features of inflammation:

Specific symptoms are related to the type of inflammation and the nature of the affected area. Signs in the damaged veins of the lower limbs and cerebral arteries will be different. 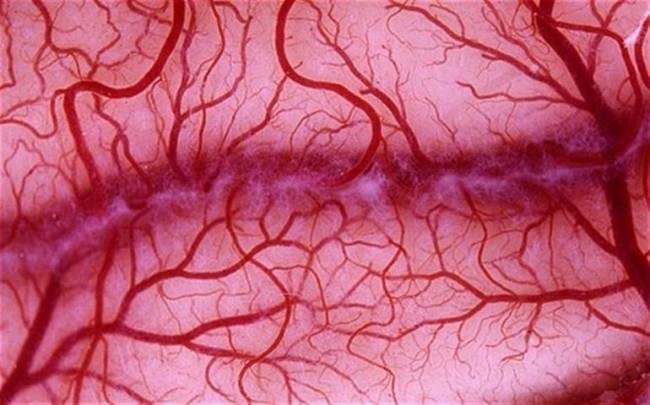 Damage to large vascular is necessarily accompanied by the characteristic symptoms of disorders in the corresponding organ.

For example, vasculitis of the pulmonary vascular has all the signs of pneumonia that is confirmed by radiographic studies. And inflammation of the veins of the lower extremities is always accompanied by a rash that somewhat simplifies the diagnosis.

In General, lesions of the arteries is more severe than the damage to the veins and are more dangerous: unlike veins and capillaries function of arteries is not duplicated, redistributed between other vascular impossible.

Rash onlegs, arms, face, of course, are more specific signs of illness, the weakness, or fever. In any case, they will separate the inflammation of small blood vascular from disease of the large arteries or deep veins.

Most of these diseases are cured in the initial stages. Fortunately or unfortunately, not all forms of vasculitis are accompanied by high temperature, which often serves as a pretext to ignore the disease or bypassed folk remedies.

In low inflammation or initial stages of the disease, medical treatment is quite sufficient.

Treatment is prescribed only after examination and consultation with all the necessary expertise. Vasculitis is nowhere as important individual approach.

In extreme cases is surgical intervention, usually when the defeat of the large vascular of the brain, heart, kidneys. Use endarterectomy - removal of cholesterol plaques, and endovascular removal of an entire portion of the vessel. The latter method is used and a phlebitis of the veins of the lower extremities.

Because of the uncertainty of the causes of the disease in the prevention can apply only General recommendations. Of course, eating healthy and accessible physical activity reduce the risk and in any case alleviate the disease. The most obvious provocateur of inflammation is Smoking. This factor should be deleted.