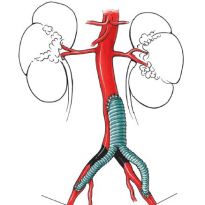 Leriche's syndrome - an infrequent diagnosis. It is characterized by obstruction in the lower abdominal aorta and its major branches. The most widespread treatment among male patients older than 50 years.

The origin and development

The origin of the state of the obstruction can have various causes:

Is congenital hypoplasia of the aorta, formation of fibro-muscular dysplasia in utero. A condition that is acquired with age - atherosclerosis, thrombosis pastabilities, aortoarteritis. The most common cause of occlusion is atherosclerosis.

The disease develops depending on the extent of involvement of the aorta and iliac branches. Over time, the lower limbs and the internal organs located in the pelvis, receive less blood flow, oxygen and nutrients. The sites above contractions are overloaded, and the bottom gradually developing hypoxia - ischemia. 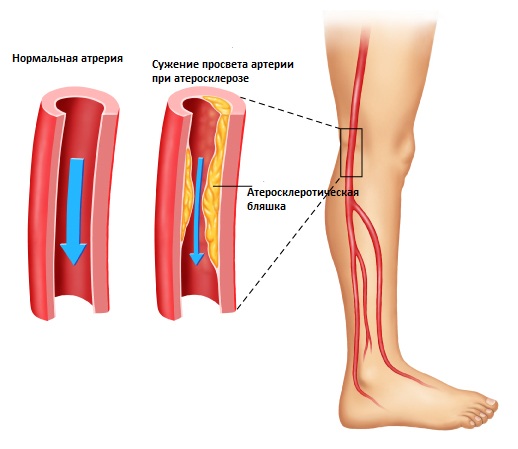 First, during periods of intense physical exertion, later at light loads and at rest, there is pain in the lower legs.

Perfusion pressure in the distal vascular bed is constantly low, impaired microcirculation leads to disruption and slowing of metabolic processes in tissues.

Circulatory disorders can be partially compensated by the formation of collaterals.

These side way flow, is gradually emerging, in part, reduce the ischemia, providing the outflow of blood from the congested areas. The replacement vessel can start operating in a few days.

The most obvious change syndrome, is caused by atherosclerosis, shows region division of the aorta and branches from her iliac artery.

Clinical description depends on the degree of ischemia, all four of them. The second degree is characterizedthe emergence of intermittent claudication, while the third increased pain, tenderness, and at rest. In the fourth stage have the first necrotic changes. 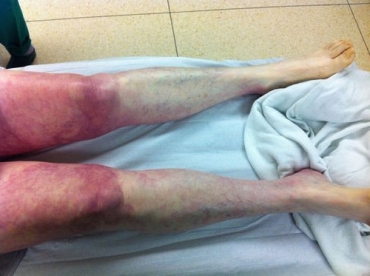 The initial symptoms, the feelings of the patient - pain in the legs when walking, on the rise and in a straight line. Intermittent claudication is the main complaint of all patients who go to the doctor and have Leriche's syndrome.

Than below is a defeat of the aorta, the less it changes direction, the better circulatory decompensation and easier treatment.

The higher the area with the obstruction, the greater spread the pain in the calf, thigh, buttocks.

This phenomenon is called high intermittent claudication. The poor circulation causes slower growth of toenails, loss of hair on them. A third of patients comes impotence. Deterioration progresses faster in younger patients than in men over 60.

Visually observed color change of the skin on the lower extremities, the initial stage of muscle atrophy, the decrease of temperature. The fourth degree of ischemia is characterized by the appearance of ulcers and areas of necrosis. Palpation of the femoral artery pulse is not palpable.

If the abdominal aorta is also affected by obstruction in the umbilical region, too, no pulse. Listening allows you to detect systolic murmur pahovom the bend. To diagnose the main symptoms are lack of pulse in the affected arteries, and a systolic murmur.

Instrumental methods of diagnostics - ultrasonic fluometry, the measurement of fluctuations of internal organs filling with blood (plethysmography), sphygmography. These studies help to assess the filling of the bloodstream. Ultrasound examination helps to assess the blood flow. 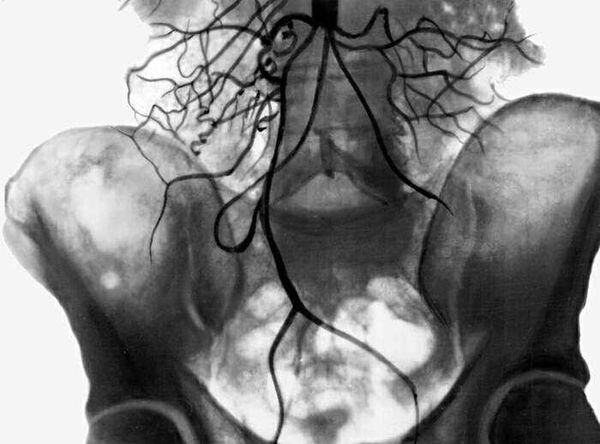 A clear picture of the blood stream allows you to see x-rays with contrast material. If you suspect Leriche's syndrome used translumbalno radiopaque angiography before the treatment.

The advantage of this method is that it shows not only the aorta and surrounding blood vascular. The aortography allows you to see the site of the lesion, its severity and the length.

If there is occlusive disease, affectsonly vascular of the lower leg, in the femoral artery pulsation is saved. Systolic murmur when the diagnosis is missing.

Such a diagnosis usually put men are not older than 30 years. When sciatica intensely pronounced pain in the region of the outer surface of the thighs, not associated with exercise, artery pulse, systolic sounds.

If the detected first and second degree ischemia, topical conservative treatment. For the expansion of narrowed vascular use the facilities, widening them and reducing blood pressure. It ganglioblokiruyuschee group and holinoliticheskie funds.

To achieve prolonged effect, the treatment prescribed by courses of 1-3 months. To improve the microcirculation using aspirin, chimes.

To improve the condition of the recommended therapies, physiotherapy. Effective agents include therapeutic exercise, massage, Spa treatment. Folk remedies in the form of vasodilator fees should not be abused.

Surgery is necessary when diagnosed ischemia of third and fourth degree. Leriche's syndrome treated with only two types of operations: revascularization of the vessel and the endoprosthesis. If you have recently had a stroke, diagnosed heart failure, complete obstruction of the arteries, the operation is not possible. Other contraindications - cirrhosis of the liver and renal failure.

If reconstructive surgery or conservative treatment is justified, all manifestations of Leriche's syndrome disappear, the patient recovers the ability to work. The preservation effect of the distal bed after surgery in most patients persists for at least ten years.

We also recommend you to review the material on atherosclerosis of the lower extremities.