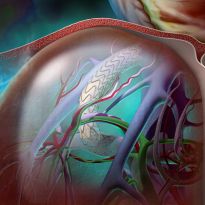 The liver is one of the most resilient organs in humans: its share drops a lot of trial - errors in diet, bad habits, long-term medication, however, the compensatory abilities of it are so great that the liver manages many years to cope with all adversity without significant damage.

The possibility of the liver are great, but not limitless. When developed abnormalities in the way blood flow in the vascular there are various obstacles, this entails a pressure increase in them. This condition is known as portal hypertension - life-threatening condition of patients.

Anatomy of a question

Passes through the liver portal vein - a major vessel which receives blood from spleen, stomach, intestine and pancreas. It represents the confluence of three veins - the upper and lower mesenteric, and splenic. The length of this venous trunk is about eight inches and a diameter of approximately one and a half.

The normal pressure of the blood in the portal vein ranges from 7-10 mm. RT. article, but in some diseases it increases to 12-20 mm: so developing portal hypertension is a complex syndrome consisting of several specific symptoms.

The types of hypertension 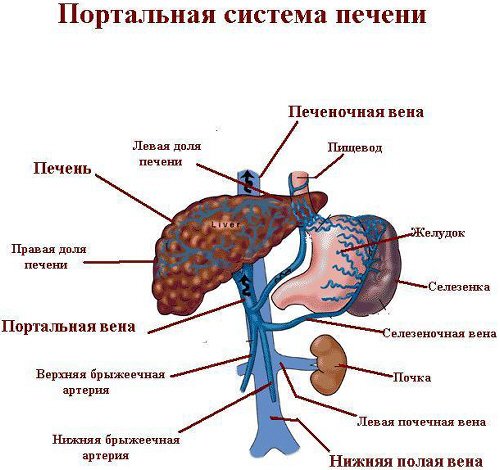 Distinguish prepecenica, intrahepatic and extrahepatic hypertension: the above classification adopted in connection with differences in the localization of pathology.

Prepecenica portal hypertension occurs in patients with congenital abnormalities of the inferior Vena cava or thrombosis, and thrombosis of the hepatic veins. The Budd-Chiari - another name for this variant of current of disease.

Extrahepatic form of hypertension caused due to chronic inflammatory processes in tissues, tumors and cirrhosis. Also cause pressure increase can be congenital obstruction of the portal vein.

Manifestations of the syndrome are diverse and depend on the localization of the pathology and stage of development.

Initial (compensated) stage of portal hypertension may not manifest or be in the form of digestive disorders. Patients complain of:

In biochemical liver samples of deviations is not marked, even if portal hypertension reaches a significant level.

Symptoms of stage of partial compensation

Without treatment, the syndrome manifested in the increase of dyspeptic symptoms, the examination also revealed moderate varicose veins in the lower esophagus and cardia, as well as a slight enlargement of the spleen.

Clinic and symptoms of decompensated forms of hypertension

This is the final stage at which the syndrome is manifested severe conditions:

What happens when cirrhosis of the liver

Cirrhosis, a serious liver pathology that develops for many reasons: in adults, the dominant role is given to abuse of alcohol and narcotic substances. Also cirrhosis of the liver starts due to prolonged intake of various medications or infection in hepatitis of various origins. 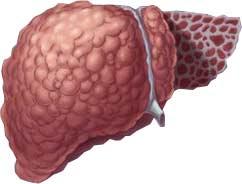 cirrhosis of the liver

Syndrome of portal hypertension is one of the most severe complications of cirrhosis, when gross violations of the liver structure when obstacles appear in its circulation. These obstacles, combined with an increase in blood flow in the hepatic artery leads to increased pressure in the portal vein up to 20-30 mm of mercury. article

The body, trying to prevent the rupture of the vessel, runs a system of "roundabout" of circulation through anastomoses - portal message with the inferior Vena cava.

Under the pressure of the blood vessel walls of the esophagus, cardia and other parts of the digestive tract weaken, in the most vulnerable places are formed varices. The gap nodes can lead to heavy bleeding that is often the cause of death in patients.

The initial stage of the syndrome when liver cirrhosis is characterized by dyspeptic disorders, pain in podreberia right and left, unpleasant sensations in the epigastric region, feeling of heaviness in the stomach after eating. Belching, unstable stool, nausea are also among the first symptoms of the disease.

Patients complain of lack of appetite, fatigue, drowsiness and apathy.

Because this set of feelings are typical of other diseases of the gastrointestinal tract, food poisoning, the patients are not in a hurry to see a doctor and get a professionals with other complaints:

The skin of such patients dries, it acquires an earthy hue. It is possible to detect a tiny rupture of blood vascular in the form of thin webs or stars. In the navel are visible large tortuous vascular - "head of Medusa".

Ascites (swelling of stomach) joins in the later stages of the disease, but some time it is temporary, because it can easily be docked the appropriate drug therapy. In the future, ascites require surgical removal of fluid from the cavity of the abdomen, which often leads to the development of peritonitis and death in patients.

Often already at the initial stage of portal hypertension patients with hypersplenism develops a special syndrome characterized by a substantial reduction in the number of certain formed elements of blood - platelets and leucocytes. Hypersplenism is a direct consequence of enlarged spleen - splenomegaly, which always accompanies portal hypertension.

Portal hypertension, accompanied by bleeding from varices in the esophagus, stomach and intestines, leading to absorption of large amount of toxins from the intestines. They cause intoxication of the brain, resulting in decompensated stage is the emergence of symptoms of encephalopathy.

They are usually classified as follows:

Diagnosis of the syndrome

Portal hypertension is diagnosed on the basis of medical examination, laboratory studies, and using instrumental and endoscopic methods.

Esophagogastroscopy method is the most simple and affordable way to detect pathology of blood vascular in the stomach and esophagus. During the procedure specialist reveals dilated veins in these parts of the gastrointestinal tract that becomes the absolute criterion for the diagnosis of portal hypertension syndrome. 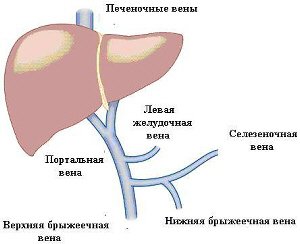 At the first degree of extension veins have a diameter of 3 mm, the second level is determined with increasing vessel diameter to About 5 mm.third degree say, when the clearance in the veins of the stomach and esophagus exceeds 5 mm.

Endoscopic examination can accurately determine not only the degree of expansion of vascular, but also to predict the likelihood of bleeding from them.

Harbingers of hemorrhage are:

Despite the obvious manifestations of the syndrome of portal hypertension and the high diagnostic possibilities of modern medical equipment, the experts sometimes have trouble identifying this vascular pathology.

This problem occurs in cases where the predominant symptom with which the patient enters the hospital, remains resistant ascites.

What people have to differentiate the syndrome of portal hypertension? Usually patients require additional consultations to specialists to rule out a similar set of symptoms:

Enlargement of the spleen, always present in the syndrome of portal hypertension can be a symptom of other conditions and diseases of the blood, however, the purpose of endoscopy of the walls of the stomach and esophagus puts everything in its place: the diagnosis of portal hypertension is completely removed if the study does not revealed changes in blood vascular.

The prognosis and treatment

The prognosis and outcome of the syndrome of portal hypertension depends on the underlying disease: for example, if the cause of the increase in pressure in the portal vein becomes liver cirrhosis, the further development of events is determined by the severity degree of liver failure. 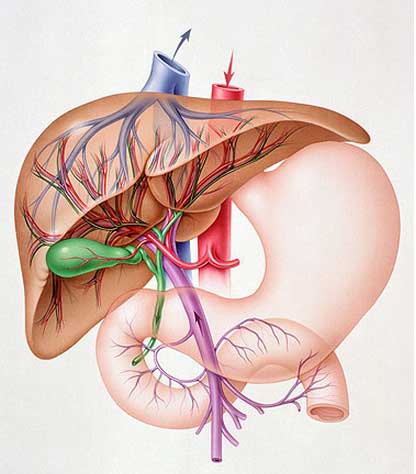 Treatment of portal hypertension is conservatively and surgically. Drug therapy is effective only in the initial stages of the disease and includes the course of vasopressin and its analogues to reduce pressure in the portal vein.

Episodes of bleeding are stopped with the help of a special probe perezimuem bleeding vessel. Applied sclerotherapy - introduction every 2-4 days special composition, sclerosing the veins of the esophagus. The effectiveness of this method is about 80 percent.

In the absence of effect of conservative treatment carried out surgery, the purpose of which is:

Operations are not conducted elderly patients, pregnant women, and in the presence of severe comorbidities.

How and why this happens to children

Portal hypertension is a very "adult" diagnosis, but it is put on and children, although the disease occurs extremely rarely.

The main reason for the development of such severe vascular disease in children is congenital anomaly of the portal vein. Recently experts say about the impact of umbilical sepsis experienced in the neonatal period. Among the possible causes of portal hypertension in children is also called omphalitis, infectious inflammation of the bottom of the umbilical wound that develops in the first two weeks of life because of the irregularity and frequency of treatment of the navel.

The disease manifests itself differently: much depends on the severity of the pathological changes in the portal vein.

Mild portal hypertension in children is observed at slightly marked venous anomalies and is characterized by mild symptoms, detected by accident in the survey about the increase of the spleen, or changes in blood count (leukopenia).

Portal hypertension of moderate severity is diagnosed in early childhood and manifested by a sharp increase in the size of the spleen. Can open and bleeding from the stomach and esophagus.

Severe portal hypertension is detected in the neonatal period when the child has:

Such children soon develop stomach bleeding, and bleeding from the esophagus. Observed ascites and splenomegaly. A feature of ascites in young children can be considered that it is not served by medications.

Obviously, a growing body partially compensates the defect of the portal vein and, over time, ascites disappears, and dyspepsia are smoothed out.

In children with portal hypertension remains decreased appetite. The stomach and spleen are much enlarged, however, the most serious problems the esophageal-gastric bleeding.

During the opened bleeding children complain of weakness, dizziness, nausea. If blood loss is significant, there may be a short-term swoon. Among other symptoms, you should calltachycardia, vomiting with blood.

Treatment of portal hypertension in children is conservative and surgical methods.

Conservative treatment is to reduce pressure in the portal vein, as well as for the relief of internal bleeding, which was and remains the main and most dangerous manifestation of the disease. Drug therapy is conventional or surgical, or in a specialized hospital.

The surgery is indicated in cases when bleeding cannot be stopped with application of conservative methods, and when to resume it some time after the relief. Surgical treatment is children aged three to seven years, sometimes surgery and one-year-old patients.

Patients performed an emergency portocaval shunting. This form of surgical intervention has a number of advantages over all the ways to stop the sudden bleeding used: it gives the opportunity to avoid prolonged fasting, anemia, decrease in blood volume (hypovolemia) and many other serious consequences.

Another definite plus portocaval shunts - the absence of recurrent bleeding in the future and need repeated operations.

There are also surgical methods for the treatment of portal hypertension in children, the use of which allows to cure patients before the onset of bleeding from the esophagus and stomach, which greatly reduces the risk of death of children or further disability.