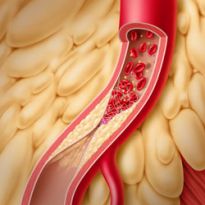 Occlusion of vascular is a violation of vascular permeability, which is due to the fact that their lumen is closed consistently on any site. The disease can occur in the lower or upper limbs, and retina and brain. If it is not carried out timely treatment in the acute stage of the disease, it may become irreversible.

A number of symptoms can be an indication that the disease has shown itself. The main symptom when the disease occurs in the extremities (upper or lower) - lack of pulsation of the arteries, which are located farther from the center of the body in relation to the location of potential problems.

The limb then begins to fade, then it appears in the marble pattern. To the touch the skin becomes cold. Sometimes there ischemic symptoms, for example, brittle nails, dryness and the visible wrinkling of skin, no hair on it and so on.

May be impaired sensitivity, tactful sensations decreases, the skin felt tingling, reduced overall muscle strength, and in extreme cases may ensue immobility of the limb that was affected. If you do not perform surgical treatment (in the case of the acute form of the disease, treatment should be as expeditious as possible), you can't avoid the gangrene of the limb.

In General, it is considered that for suspicion to this disease, you need to have at least one of the five signs (especially when the occlusion manifests itself in the lower extremities): 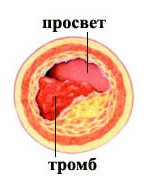 All of these symptoms in the English language begin with the letter "p" so that you can meet the disease under the alternative name - the five P.

Be classified occlusion that occurs in the vascular can different symptoms. Primarily it varies in view of its localization and affected vascular.

Referring to the targeted vessel is isolated:

On the localization of the occlusion is:

Most often, approximately fifty percent of all cases happen to be occlusion of the lower extremities. Much rarer vascular lesions of the Central nervous system and blood vascular of head section, that is, the supply of blood to the head.

Most commonly affected are the internal carotid artery. There develops a lack of nutrition in the brain and cells of the CNS. The result may be a serious pathology, which will lead to cerebral infarction - an ischemic stroke, so after that may disrupt a significant part of the activities of the systems of the body - all these can lead to dementia and paralysis.

You may also experience this disease in the vertebral artery that affects the occipital portion of the brain.

In this case, if not carried out treatment, the damaged part of the brain can lead to paralysis, dizziness, problems with vision, speech, obmorozheniju.

Unlike the symptoms of this disease in the lower extremities and brain occlusion of the vascular that nourish the retina may begin suddenly and painlessly, but in the end, leads to practically complete loss of vision in one eye that was affected. Usually this problem occurs in men after the age of fifty and it requires surgical treatment.

There are a number of reasons, which can be a consequence of the fact that there is occlusion of the vascular in the lower extremities, brain and other places.

There are several basic:

Embolism. Under this name hides a blockage in the vessel a dense formation, located in the direction of blood flow. In turn, PE can be a variety of reasons, most often infectious.

There are several subspecies: 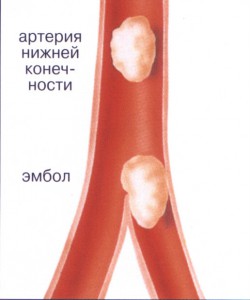 Thrombosis. This is the process by which the arteries regularly decreases, as constantly increasing the number and size of thrombi on the inner walls.

This may be because of atherosclerosis, but the injuries and infections can also cause this problem. Moreover, the occlusion may occur due to the fault of thrombosis, so he creates conditions for the development of embolism, which increases the risk of disease are described.Aneurysm.

This problemvascular similarly may be the reason that there will be occlusion. This anomaly, which is expressed in the sudden extension or protrusion of part of the walls of blood vascular. Can be congenital or acquired. Among the potential consequences described above embolism and thrombosis.

Injury. Finally, occlusion can occur when bone or muscle tissue is damaged, resulting in compression of large blood vascular, normal blood flow is hampered significantly. Where the artery is pinched, you can start the processes of thrombosis and embolism - so treatment after injury should start promptly, regardless of injury is the lower limbs, brain or anything else.

To diagnose disease, it is necessary to conduct a series of examinations, including palpation of the pulse in problem areas, functional test, laboratory blood tests, duplex scanning, CT angiography, Mr-angiography.

Need to try to diagnose the first manifestations of the symptoms of the disease, because it is (in acute form) develops quickly, and therefore can lead to amputation of the lower or upper extremities, and in a situation when the problem occurred to the brain or manifested in the retina it is necessary to act more expeditiously because of the possibility of surgical intervention, that the brain is minimal.

If you notice signs described disease you need to make an emergency hospitalization and consultation with a doctor specializing in blood vascular. It all depends on what stage of ischemia began to develop because of this disease:

To prevent the re-emergence of problems after the surgery for some time continues to be the treatment, namely anticoagulant therapy.

Not to have needed treatment, it is best to use complex of preventive measures that will help reduce the likelihood of this is extremely unpleasant problem:

We recommend you to familiarize yourself with what are the causes of venous stasis.