Obliterating atherosclerosis of the legs: stage, diagnosis, prevention and treatment 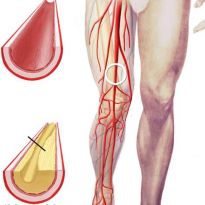 You're the man, already turned forty years old, a heavy smoker and a lover of a drink or two for a hearty, fatty meal. For some time you begin to notice that your gait was heavy, knock-kneed, and foot pains. What is happening to you? If you pass the examination, one will be diagnosed with obliterating atherosclerosis of the lower extremities.

Most likely a vascular problem he has many years takes leading positions along with hypertension. How to see the threat in time to avoid a disease which can even lead to disability and early death if run?

What happens to vascular?

Healthy vascular is a hollow tube through which the extremity rises up the blood, carrying oxygen and nutrients to the tissues of the organs. However, the oxygen and nutrients is not the only blood components: it also constantly circulating fatty complexes, part of which is cholesterol. 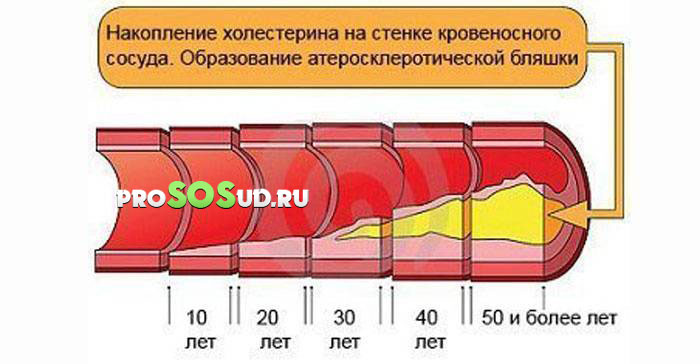 He partially enters the body with food, but most of it is produced in the liver, adrenal glands, kidneys and gonads to regulate the metabolic, digestive and other vital processes.

Cholesterol may have a different density - high and low, but it compounds the low density responsible for the development of atherosclerosis.

Settling on the walls of the large vascular ("excellent" in its place, the arteries of large and medium diameter), he initially creates grease stains, which gradually thicken and take the form of domed plaques protruding into the lumen of the vascular and narrowing them. In medicine, the narrowing of blood vascular is called obliteration.

This process takes several years and develops in places of division of the arteries, but most often it involved the vascular of the legs. Atherosclerosis affects the large vascular - the aorta and iliac arteries (Leriche's syndrome), as well as smaller arteries of the femoral-popliteal segment.

The course and symptoms of atherosclerosis of the vascular of the legs, depending on the stage of the disease.

Atherosclerosis goes through four stages, each of which has its own manifestations.

There are the following stages of development:

At the payment stage patients report not too disturbing and transitory symptoms are: coldness of the feet even in hot weather, the tingling infingers, burning them, and sometimes convulsions.

If you ask such a patient to pass at a fast enough rate a quarter of a mile or a little more, at the end of the path a person begins to limp and experience pain in the calf. Is - intermittent claudication and a sure sign that atherosclerosis has already begun its destructive work. 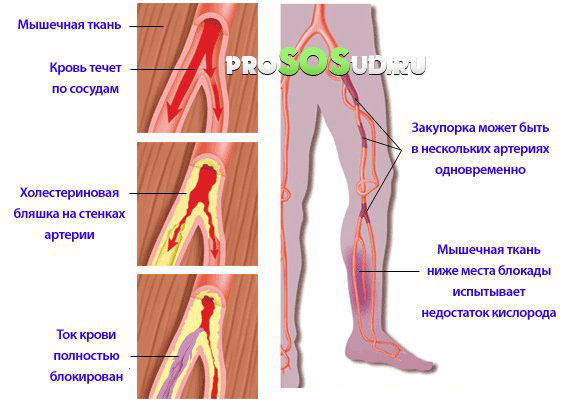 According to how the person is lame, you can determine where the affected vascular: experts identify high and low lameness. Thus, the high intermittent claudication, in which a person experiences pain in the gluteal muscles and the thighs, a characteristic narrowing of the aorta and iliac arteries. At low claudication, patients complain of painful sensations in the legs and feet, which is a symptom of lesions of the femoral and popliteal arteries.

After a short rest, the pain goes away, disappears and a burning sensation in the fingers: the vascular permeability is not so disrupted that the symptoms persisted for too long.

The time - examined and start the treatment: it is the stage of compensation you can obtain the most consistent results, which will further help to preserve the ability to walk.

At the stage of partial compensation for the pain and lameness appear at the shorter distance: a person is not more than two hundred meters, after which it needs a rest. 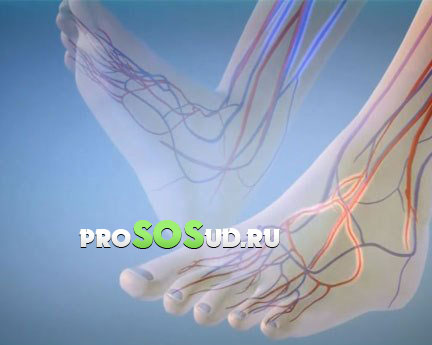 Noteworthy is the appearance and stop: they are not only always cold to the touch and hard to keep warm, but pale, and the soles appear to be a thickening in the form of corns.

Nails in patients with atherosclerosis thicken, lose luster and elasticity, acquiring a Matt or brownish tint, at trimming easily crumble and break.

Vasoconstriction has been observed above - in legs. Enough to hold them with your hand to select the areas, is completely devoid of any vegetation.

However, the skin of the legs in patients with atherosclerosis is not smooth due to the fact that her fatty tissue begins to atrophy, the skin looks dry and loose. Lost and trophism of the small muscles of the foot.

The treatment is still not too late to begin and at this stage, atherosclerosis is quite amenable to physical therapy and drug effects, which allows to obtain even and moderate, but encouraging results.

Stage of decompensation is characterized by a significant decrease in the walking speed, severe claudication: patients with difficulty be not more than fifty meters.

The pain is a constant companion these people: sheit is noted even at rest. The color of the skin sore feet changes depending on its position: raised limb quickly fades due to the outflow of blood, but to lower it down, as it acquires a distinct red hue. 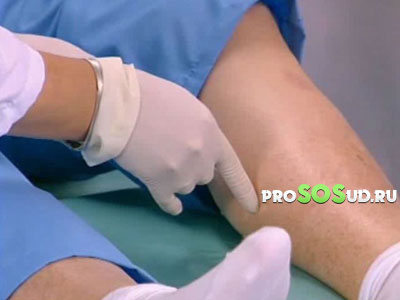 Because the skin of the feet and lower legs to the third stage much thinner, any scratch or careless nail cutting can lead to the formation of superficial ulcers.

Treatment at the stage of decompensation cannot be confined to physical therapy and medication: these patients, surgical correction of damaged vascular.

The stage of destruction of tissue and blood vascular

Destructive stage - the final and most severe pain in the affected limbs become intolerable and persistent, the man is completely deprived of the opportunity to move independently.

Ulcers and gangrenous lesions appear mainly on the fingers. Due to pronounced inflammation of these areas are covered with bloom, and around them is formed the characteristic thickening of the grapefruit. Foot and ankle swelling.

Not only lameness and pain

Obliterating atherosclerosis of arteries of the lower extremities is manifested not only by deterioration of gait, fatigue and pain in the legs. To suspect yourself beginning disease and rush to a doctor for examination and further treatment must every man who observes himself:

Disease of blood vascular characterized by narrowing them and further blockage of the diagnosed functional tests and hardware studies.

They are held in the supine position and sitting. The aim of the trial is to assess the extent of ishemizatsii (bleeding) feet and shins, as well as the rate of appearance of unpleasant sensations in the limbs when lifting the foot and squeezing the calf muscles in certain poses. 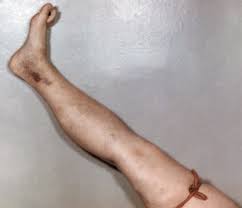 Sample Goldflame is lying on the couch with your feet in stirrups. The examinee is invited to bend and straighten legs in the ankles. Sore feet get tired after 10 seconds, sometimes a little later. In addition, there is an expressed pallor of the feet.

Sample Sitenko-Shamova - way to find out how to quickly restoring circulation in the muscles after theythe compression elastic bandage. For this the patient is asked to lie on the couch, on the upper third of the thigh impose bandage, which is removed after five minutes.

If the vessel is healthy, the skin turns pink in ten seconds: it's the so-called reactive hyperemia. The blood circulation in patients with leg recovers much more slowly - sometimes it takes a few minutes.

Symptom of compression of the nail plate is a very slow restoration of the normal color of the nail of the thumb after pressing down on the plate for five to ten seconds. In healthy people, the blanching of the nail almost immediately disappears.

If you suspect an obliteration of the vascular of the legs, patients are administered hardware diagnostics, which includes several types of research:

These methods allow you to quickly and fully assess the degree of impairment of blood flow in the vascular, and to determine future approaches to the treatment of the disease.

How to save legs

Easy gait and ability to walk through relatively long distances without fatigue, you can save until old age, if life to care for the health of blood vascular.

The more your weight corresponds to the growth, the easier you will move and the less will be the load on the legs.

Watch out for the quality of their food

Less greasy and heavy foods you eat daily, the less bad cholesterol will get your body in the end, the clearer will be the vascular.

Eliminate or extremely limit the alcohol

The less and less you drink, the less will be the load on the heart.

The sooner you stop Smoking, the fewer vascular will be subject to constant spasms.

Let your feet get used to walking: take care not to drive or use other transport if the distance is not very large. Working at the computer, often get up and warm up, the blood in the vascular does not stagnate.