Home / Of vascular disease / Treatment of diabetic angiopathy of the legs

Treatment of diabetic angiopathy of the legs 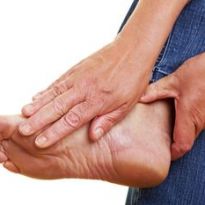 Diabetic angiopathy is a dangerous consequence of the complications of one of the types of diabetes either of the first or second type. If the occurrence of the disease when first identified its symptoms, is not made operative treatment, many organs can be disrupted, which can lead to extreme negative consequences.

The danger of this disease can vary considerably, because it develops in fundamentally different bodies. But even in the milder forms, and under the most optimistic scenario, angiopathy definitely worsen the health of the patient, and therefore the total quality of life; its General condition can be reduced to a quite noticeable degree.

Sometimes the human lifespan is reduced due to the existence of such complications.

The manifestation of this disease can vary depending on where exactly is the source of complications. Accordingly, the symptoms can be radically different. The localization problem can be pronounced, among the major areas that are at risk can be identified: 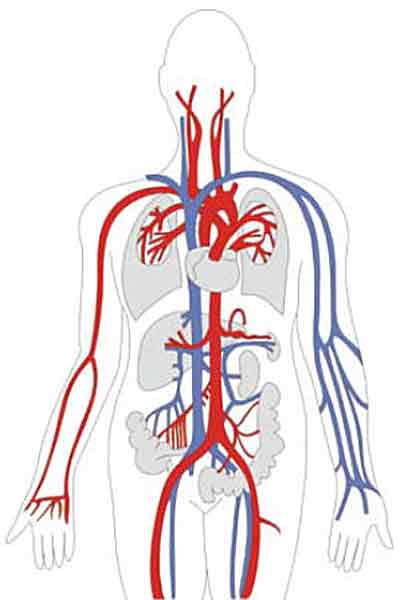 The main manifestations of the complications can include:

The indirect symptoms that you should pay attention in time to grab the disease, to begin treatment and do not allow it to develop to such an extent that, for example, will develop gangrene of the lower extremities:

In the later and advanced stages of the disease can start to go numb footstart pronounced nephropathy or retinopathy, osteomyelitis, cellulitis on the dorsal surface of the foot or the appearance of trophic ulcers and gangrene toes, and sometimes the whole foot or all the lower extremities.

In this case, the feet can easily be infected at the slightest damage that they would suffer, so you must carefully pay attention to early signs of problems to prevent such a negative development.

The main reason why developing diabetic angiopathy of lower extremities is diabetes mellitus, which refers to the first or second type. 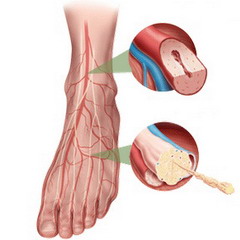 Blockage of blood vascular in the legs

Angiopathy appears when an existing disease was present for a long time, but no medical intervention is, thus, not carried out.

So even at the first signs of the potential symptoms of this disease, you must immediately proceed to preventive measures.

Begins to develop a disorder of this type, usually, when diabetes a person has at least three years. There's a chance that, even if he does not suspect the disease began to develop - and maybe it is already in the stage where you need to take any swift action.

If to speak about more detailed reasons on the level of functioning of the body, when a diabetic disorder, its cause is a narrowing of the small blood vascular that are in close proximity to various cells in the body.

This subspecies is called microangiopathy. The other option of manifestation is macroangiopathy that occurs when atherosclerotic lesions are the vascular that are larger.

If angiopathy is unnecessarily running, the problem may be more global than just the above symptoms. Among the possible negative consequences that are inherent in a strong development of the disease, among other features such as: 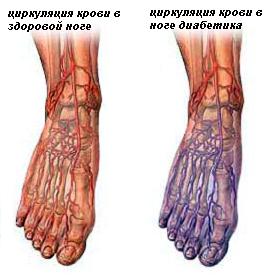 The first method, which revealed diabetic angiopathy is a normal physical examination of the patient. The doctor examines the patient's complaints, examines it, identifies the common symptoms of the problem. Initially must be confirmed by tests for diabetes becausethese problems are interdependent.

Once there is reason to continue the survey begins a series of studies that are performed with high-tech medical devices.

It is possible to identify several key diagnostic methods used in modern medicine: 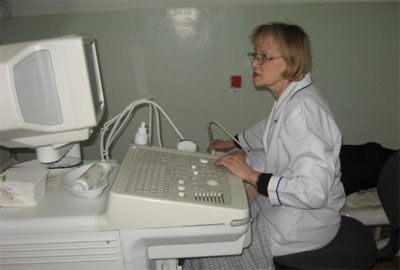 To cure this problem, it is necessary first of all to deal with compensation of diabetes as the main cause of the disease.

It is also necessary to bring the disturbed metabolism:

All this is done using a special diet. It is composed of purely individual way for each patient. It is limited to easily digestible carbohydrates and animal fats. Diet alone will not be effective, it must be supplemented with potassium supplements, anabolic hormones, andhypoglycemic agents, of which the most preferred is gliclazide.

Also needs to continue therapy with insulin or other analogues. In addition, if carried out comprehensive treatment, we cannot dispense with any of angioprotectors, for example, parmidina, dobezilata or something similar.

It is important to maintain a constant level of cholesterol in the blood, because angiospasticskie changes in the blood usually occur at a high level of lipoproteins. If their level is too high, then the destructive processes in the lower extremities and other parts of the body will happen much faster than we would like. Blood also needs to be thin, because its low viscosity in small capillaries it will get much easier, and therefore the problems will be much less pronounced.

If you have started to receive the changes of ulcerative-necrotic type, conservative treatment may be less effective necrotic isolated areas can begin to be mummified or even reject. Because in this case, drugs are introduced, usually intra-arterial.

If the patient has diabetic disease is in this stage that started to develop limb ischemia, is a special procedure that bears the name of "gravitational plasmapheresis". It helps to minimize ischemic pain, make the wound healing, and rejection of necrotic parts more fast - and it will help the person more likely to cope with the problem and begin to feel much more comfortable.

Can also be surgical treatment, such as lumbar sympathectomy affecting the walls of the arteries. More expensive, but quite effective treatments are, for example, reconstructive surgery, which will help to restore the lumen of the large arteries.

If it came to the amputation, the medicine can offer high quality dentures that will bring the life to its normal level to the maximum extent.

It is also considered that can help alleviate the problem some tools related to folk medicine. Of course, only they hope it is not necessary, it is necessary to combine them with medical drugs.

To folk remedies include a variety of plants that can improve metabolism, for example, ginseng.

Medicinal dandelion, along with elecampane will help to normalize carbohydrate metabolism. It is recommended to replace coffee with chicory, preferably dried,roasted and ground manually from its leaves can be cooked perfectly acting on the body with a similar issue salads.

However, it is important to once again remember that angiopathy, diabetic as it may not be resolved in a definitive manner. Because diabetes yet effective up to the end cure is not possible, and yet not leave it, will not disappear and it is an unpleasant consequence. But it is equally important to understand that this is not a sentence.

The problem can be effectively contained and a person can live a full life without any problems, just it will have some therapeutic treatments that it needs to do and the specific treatment which it needs periodically to make sure the symptoms are not proved and was not aggravated in such a way that it prevented him.

Diabetes can occur angiopathy of the retina, about it you can read on our website.