Home / Of vascular disease / What is acrocyanosis: the emergence of the disease, treatment, prevention

What is acrocyanosis: the emergence of the disease, treatment, prevention 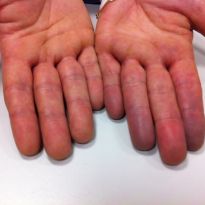 Acrocyanosis - bluish color of the skin, which is not an independent disease. It is always a symptom of some problems in the body. Reasons for insufficient supply of arterial blood to the small capillaries. Acrocyanosis is evident, remote from the heart the parts of our body.

When venous blood increases the number of recovered (i.e., not associated with oxygen) hemoglobin, the skin becomes bluish tint in areas remote from the heart. This phenomenon may be due to the imbalance between the body's need for oxygen and the number of entrants to a particular sector of blood. 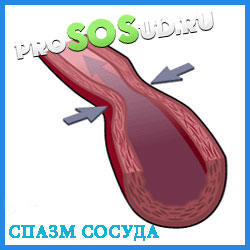 The reasons for this imbalance may be in the slowing of blood flow in vasospasm. Acrocyanosis is most often due to chronic heart failure or congenital heart disease, in which reduced oxygen levels in the pulmonary circulation.

However, there may be other reasons, for example, adolescent girls against the background of hormonal changes often there is spasm of peripheral vascular, which leads to discoloration of the skin in certain areas.

In addition, the reason may be varicose or hypothermia, since both of these problems lead to a noticeable weakening of the blood flow. Disruption of the sympathetic nervous system, poisoning by certain substances to the list of causes of acrocyanosis.

Diseases such as asthma or emphysema can also lead to acrocyanosis.

Decided to allocate the types of acrocyanosis depending on its origin:

Blueness of the skin may occur in newborns. Most often it is peripheral acrocyanosis, which is a temporary phenomenon. Also called physiological because it is associated with the characteristics of the organism of newborns who have not yet adapted to the new conditions of life outside the mother's body. 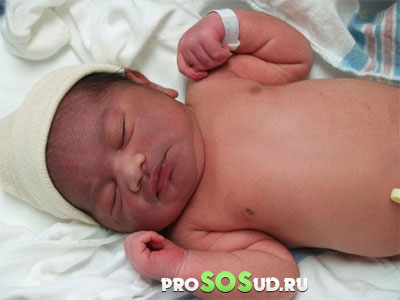 Many healthy babies in the first days of staying at home remains embryonic type of blood circulation, because of this, newborns can see bluish areas thatusually located around the mouth, on the hands, on the feet.

Symptoms of acrocyanosis become worse when the baby is swaddled when he shouts, worried. This condition does not last long, as the adaptation of the organism of newborns, it totally is.

In some cases, cyanosis of the skin of newborns may have this condition permanently. Then it's a symptom of insufficient blood oxygen saturation and hypoxia.

This condition requires close attention, as it can be due to congenital defects of the cardiovascular system and require urgent help. For this reason, pediatricians consider it necessary, additional tests of children with acrocyanosis, to hedge in case of pathologies of the heart.

The state of the vascular and of the skin depends to what extent will manifest acrocyanosis. It can be mild cyanosis, and may be intense and quite dark in color. Localization discoloration of skin is most often found in the mouth, they are usually cyanosed sharply stands out against the normal color of the tongue, inside of the cheeks.

On the second place by frequency - acrocyanosis of the hands and feet, accompanied by the same changes in the nails. Rare that you see the blueness in some areas of the face, ears. This may be the chin, the nose tip, the region of nasolabial triangle. 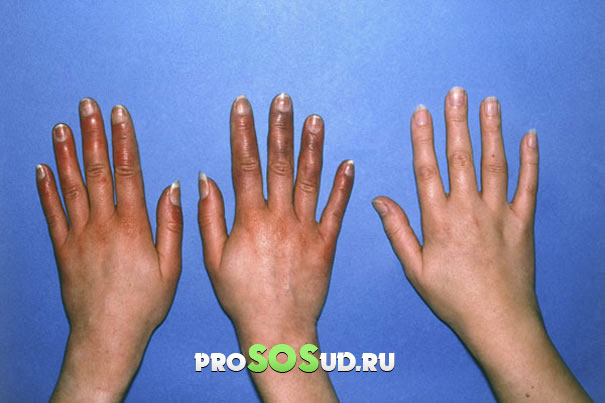 If this condition is caused by diseases of the respiratory system or heart, the cyanosis will always be maintained. When spazmirovannah vascular phenomenon acrocyanosis continues for some time depending on the duration of the spasm.

If the cause was hypothermia, and after rewarming everything passes, and the skin becomes normal color. Situation can a normal household, for example, you forgot gloves, it's cold outside, or carry a heavy bag, which you pinch the vascular on the fingers.

In this case, brush or fingers can turn blue, but as soon as restored normal blood flow, they will become its normal color.

The pain associated with this problem no, but in some cases can be uncomfortable. Prolonged manifestations, many patients noted the appearance of convulsive contractions in the area of lividity. Trophic disorders do not develop areas of discoloration of the skin, is one of the important diagnostic signs.

For the treatment of acrocyanosis first of all you need to find out the cause, that is, to make an accurate diagnosis. To do this, the doctor talks tothe patient clarifies the conditions under which appears and disappears cyanosis.

In cases of suspected cardiovascular disorders are diagnostic procedures to detect them. ECG, ultrasound of the heart - the standard research, but can be assigned to others.For further diagnosis can be carried out cold test, which will show the reaction vascular.

Then eliminating the causes or alleviate the condition of the cardiovascular pathologies of the skin is similar in color to normal or, in General, acquires a natural color. Treatment prescribed not by reason of the acrocyanosis, and about its causes.

In cardiovascular diseases, all treatment should be directed at the underlying disease. In this case, no other measures will not help, only a set of measures will effect. Heart medications are appointed by the cardiologist after a thorough examination and diagnosis.

If this problem newborns in the peripheral form, then treatment is not required at all, just need to wait a bit.

It is easier to prevent acrocyanosis, which is called hypothermia. You just need to take care of warm clothes and be out in the cold too long. To prevent problems caused by vascular spasm, fit, active and healthy lifestyle. Be sure to walk on air, to do some kind of fitness or dance, conduct tempering procedure.

Warning acrocyanosis caused by heart disorders will be early access to a doctor and start treatment of the underlying disease.